Back in June of 2021, Ravens offensive tackle Ja’Wuan James filed a grievance against the Broncos seeking $15MM consisting of his 2021 and 2022 salaries of $10MM and $5MM, respectively. James has reportedly settled with his former team and will receive $1.09MM, according to Charean Williams of NBC Sports.

The grievance stems from a torn Achilles that James suffered while working out away from the Broncos’ facility during the 2021 offseason. He missed out on a $9.85MM guaranteed salary that Denver claimed was only guaranteed for injuries sustained at the team facility.

James has not played since the injury and is currently listed as the backup to Baltimore’s starting left tackle Ronnie Stanley. Ravens fans are hoping not to have to see James come in, but, historically, Stanley has only played in two games since signing a contract extension in October of 2020.

Here are a few more rumors from the AFC West, starting with two rumors out of Sin City:

Sam Martin didn’t spend much time on the open market. The veteran punter is signing with the Bills, reports NFL Network’s Peter Schrager (on Twitter). His college Tom Pelissero adds that it is a one-year deal. 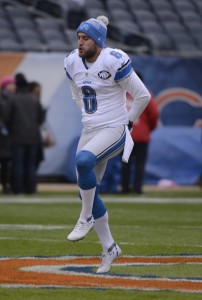 The move comes just hours after ESPN’s Field Yates reported that Martin visited Buffalo (Twitter link). That comes as little surprise, given the team’s need at the position. Indeed, Mike Klis of 9News indicated (via Twitter) that, assuming his physical went well, a contract would be inevitable.

Martin, 32, was released by the Broncos on Monday. That ended his two-year tenure in the Mile High City, where his punting average (46.4) slightly outperformed that of his time with the Lions. While he was only mid-pack statically speaking last season, it was reported that the decision to move on from him was financially driven. Denver will replace Martin with Corliss Waitman.

The Bills have been in need of a punter since they waived Matt Araiza. The sixth-round rookie was named in a lawsuit alleging he was involved in a gang rape at San Diego State; the team parted ways with him shortly thereafter. That left Buffalo without a punter, and they worked out a number of options to potentially serve as replacements.

Martin was one of a pair of notable veterans to be let go recently in favor of younger, less expensive options. The Titans released Brett Kern on Monday, leaving him as arguably the top option on the market. His personal ties to the Buffalo area made Kern a favorite to land with the Bills, but their special teams should nevertheless be much less of a concern now with Martin in the fold.

The Broncos will bail on Sam Martin‘s contract after two seasons. They are releasing the veteran punter Monday, Ian Rapoport of NFL.com tweets. Martin had been competing with Corliss Waitman for Denver’s punting gig. Money looks to have motivated this transaction, however.

Martin’s three-year contract carried a $2.25MM base salary for 2022. The Broncos will pocket that amount by cutting their incumbent punter, who had no guarantees remaining in his three-year, $7.05MM deal. That money was behind this release, per 9News’ Mike Klis, who notes the team was informed Sunday that Martin would not accept a pay cut (Twitter link).

Martin’s 46.0-per-punt average ranked just 18th in the NFL last season, despite playing in Denver’s friendlier punting confines. The former Lions punter, who is going into his age-32 season, should still generate interest on the market.

Waitman, 27, has just two games’ worth of NFL experience. Both came in 2021 for the Steelers. Pittsburgh waived Waitman in January, leading to a Denver claim. It could well lead to the South Alabama alum being the Broncos’ Week 1 punter. Waitman is only set to make $825K this season.

The Broncos are bringing in some competition for Sam Martin. The team announced today that they’ve signed punter Max Duffy. 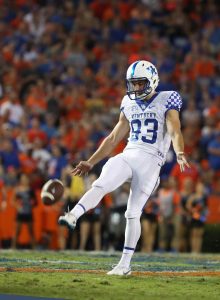 The Australian-born athlete spent a handful of years in the Australian Football League, but he announced his retirement from that league in 2017 as he pursued a career in American football. He ended up catching on with Kentucky, appearing in 34 games during his collegiate career. Duffy averaged 46 yards on his 151 collegiate punts, and he earned All-SEC honors in both 2019 and 2020. He also received a unanimous first-team All-American nod in 2019.

Duffy was actually drafted by Toronto in the fourth round of April’s CFL Draft, but the 28-year-old will instead try his luck in the NFL.

In Denver, Duffy will have to compete with Martin for a roster spot. The veteran punter joined Denver last offseason on a three-year, $7MM deal, and his final 2020 punting numbers (including 46.8 yards per punt) were on-par with his career marks. Martin did struggle a bit on kickoffs, averaging a career-low 57-yards per kick.