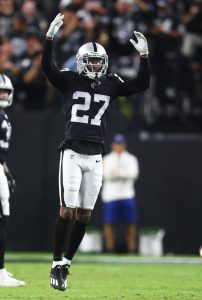 The fourth-year cornerback is heading to the Cardinals, Adam Schefter of ESPN.com tweets. One season remains on Mullen’s rookie contract. This helps a corner-needy Cardinals squad while also leading yet another early recent Raiders pick off their roster.

This move saved Mullen from being waived, per NFL.com’s Ian Rapoport, who adds the Cardinals will send the Raiders a conditional seventh-round pick (Twitter link). The pick could bump to sixth-round value depending on Mullen’s playing time. The Cardinals have now acquired three first- or second-round picks from the 2019 draft this year, adding Marquise Brown (Round 1) in April and Cody Ford (Round 2) earlier this month.

The No. 40 overall pick in the 2019 draft, Mullen was traded minutes after the No. 40 pick in 2020 (Ross Blacklock) was dealt. Unlike the former Texans second-round choice, Mullen had been a regular starter with the team that drafted him. The Clemson product started 31 games with the Raiders, including all 16 during the 2020 season.

For the Cardinals, this could be a valuable move. They have been in need at the corner position for a while. Arizona’s agreement with former first-round pick Jeff Gladney preceded the ex-Viking dying tragically in a May car accident. While Kliff Kingsbury indicated in June the Cards would look at veteran corners, only Josh Jackson arrived as a notable investment. The Cards cut Jackson on Monday but were still rumored to be searching at the position. Mullen represents a starter-caliber option alongside Byron Murphy.

Mullen, however, is coming off an injury-plagued stretch. A foot injury limited him to five games last season, and that issue required a procedure in May. That surgery led to Mullen missing the start of Las Vegas’ training camp. The Cardinals will bet on Mullen staying healthy in his contract year. Although Pro Football Focus has never viewed Mullen as an upper-crust corner, Arizona is limited on options here. It would not surprise if the team was not done tinkering at this spot.

As for Vegas, the team has now moved on from primary starters Mullen and Casey Hayward this year. Hayward signed with the Falcons in free agency. The Raiders did acquire Rock Ya-Sin in the Yannick Ngakoue trade and have emerging slot player Nate Hobbs under contract for three more seasons. The team also signed former Baltimore corner Anthony Averett this offseason.