Lammons was a special teams ace for the Chiefs, leading the team in ST snaps and finishing the regular season with seven tackles. He earned his walking papers the other day with the Chiefs preparing to activate at least one of running back Clyde Edwards-Helaire or tight end Jody Fortson. The Bengals swooped in with the claim, but the team won’t get any immediate intel on their AFC Championship opponent. The claim is deferred until February 13, which means the only competitive advantage Cincy got was preventing Lammons from rejoining Kansas City’s practice squad.

Mullen was a second-round pick by the Raiders back in 2019. Despite starting 31 of his 37 appearances through his first three seasons in the NFL, he was traded to the Cardinals for a seventh-round pick prior to the 2022 campaign. He got into eight games for Arizona before getting waived, and he caught on with the Cowboys in December. The 25-year-old won’t officially join Baltimore until the day after the Super Bowl (February 13).

Alvin Kamara and Chris Lammons‘ alleged battery of a man in Las Vegas has put both players on the suspension radar, but any prospective ban might not happen until next season. The already-delayed case brought another postponement Thursday. 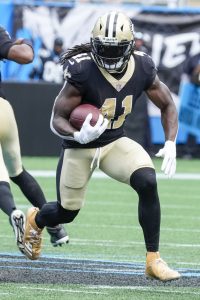 Lawyers for Kamara and Lammons were in court today, but David Charns of Las Vegas 8 News Now tweets the proceedings have been pushed to Nov. 9. Although a plea agreement may be in play, per NewOrleans.football’s Mike Triplett (on Twitter), the latest delay increases Kamara’s chances of playing out the 2022 season.

This is related to the Pro Bowl-weekend incident that had Kamara and Lammons, currently with the Chiefs, at the scene of a fight at a Vegas casino. Lammons and Kamara, who has since been slapped with a civil lawsuit as well, were each charged with battery resulting in substantial bodily harm and conspiracy to commit battery. The Saints running back has been bracing for a six-game ban for months.

Kamara, 27, said he threw punches thinking the victim was running away and that he could not remember if he punched Darnell Greene while he was on the ground. Video surveillance showed Kamara punching Greene approximately eight times and also revealed other members of Kamara’s group stomping on the victim, who was knocked unconscious and sustained an orbital bone fracture. Lammons currently resides as a Chiefs backup cornerback.

This year’s Saints have Mark Ingram as Kamara’s top backup. With Ingram in his age-33 season, that might not be the case in 2023. Ingram’s contract expires at season’s end. Latavius Murray, 32, also rejoined the Saints on a practice squad deal, doing so ahead of a Week 2 game Kamara missed due to injury. Should a Kamara suspension surface this year, the two 30-somethings would likely be asked to carry the load. If Kamara’s ban commences next year, it should be expected the Saints will have a younger Kamara backup prepared to play a role. Third-year UDFA Tony Jones and veteran special-teamer Dwayne Washington are also on New Orleans’ roster.

Benkert spent the 2021 season with the Packers, after three years with the Falcons. He was signed just over one year ago to provide insurance with the future of Aaron Rodgers in doubt, and Jordan Love as the only other signal-caller on the roster. He made one regular season appearance, but with Rodgers now signed to an extension and Love still under contract for at least two more years, the team is less in need of the 26-year-old this year.

Hilliard’s ban comes as a result of PED usage (Twitter link via Paul Schwartz of the New York Post). The former UDFA tweeted an explanation, stating that he mistakenly took the wrong prescription medication, and that he will not appeal the suspension. The Ohio State alum played in two games with the Giants last season, logging 15 special teams snaps. This news will weaken what was already, as Schwartz notes, his tenuous grip on a 53-man roster spot.

First-round draft pick Alex Leatherwood had an up-and-down rookie season in Las Vegas. After struggling a bit at right tackle, Leatherwood was moved to guard to fill in after injuries to starters Richie Incognito and Denzelle Good. According to Vic Tafur of The Athletic, the Raiders’ former staff intended to move Leatherwood back to his drafted position next season.

The decision is now out of their hands and in the hands of new offensive line coach Carmen Bricillo. With Kolton Miller set at left tackle and Andre James filling in admirably this season with the loss of center Rodney Hudson in a trade to the Cardinals last year, the Raiders have three offensive line spots with which to play around. Bricillo’s placement of Leatherwood will likely depend on how they choose to address those open positions.

Here are a few more notes from around the AFC, starting with another note from the West: