Laquon Treadwell has already found a new NFL home, though he will not begin the 2022 campaign on a 53-man roster. The wideout is joining the Patriots as a member of their practice squad, per ESPN’s Field Yates (Twitter link).

The 27-year-old was part of the Jaguars’ final roster cuts one week ago, despite having re-signed with the team during free agency. His time in Jacksonville lasted just one season, and saw Treadwell post a career-high 434 yards. He, like Laviska Shenault, though, found himself on the wrong side of their roster bubble.

The former Vikings first-rounder never lived up to his draft stock across four years in Minnesota, topping the 300-yard mark just one. That led him to a one-year stint in Atlanta, though he only suited up five times for the Falcons. Now on his third team in as many seasons, the Ole Miss product appears to be taking the first offer which came his way following his Jaguars release.

As Yates noted earlier today (on Twitter), the Patriots hosted Treadwell on a visit. New England’s pass-catching corps has seen a number of changes this offseason, including the trade acquisition of DeVante Parker and the addition of Tyquan Thornton in the second round of the draft. They, along with returnees Jakobi Meyers, Kendrick Bourne and Nelson Agholor will leave Treadwell with a steep path to playing time.

That unit faces several questions, however, so underwhelming performances or injuries could give him an opportunity to build off of last season’s personal success. Entering the season, nevertheless, a step back in terms of production seems more likely.

A notable name has surfaced with respect to the Jaguars’ final roster cuts. The team is moving on from receiver Laquon Treadwell, as detailed by a ProFootballNetwork.com report. 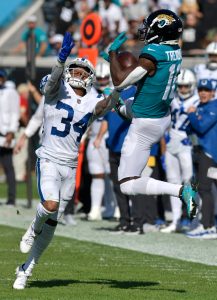 The 2016 first-rounder never lived up to his draft stock with the Vikings; his most productive campaign came in 2018, when he made 35 catches for 302 yards. Given his underwhelming numbers, it came as little surprise when he moved on to Atlanta in free agency the following offseason. That led to an equally underwhelming year, however, leaving expectations low for his inaugural Jacksonville season.

Matching his career high in starts (seven), the Ole Miss alum also set a new personal mark with 434 yards on 33 receptions, leading to an impressive 13.2 yard average. That represented one of the few bright spots for the Jaguars last season, and earned Treadwell a one-year deal in March. He lost out a camp/preseason battle for the team’s last receiver spots, however, leading to his release.

Jacksonville actively made additions to their pass-catching corps this offseason, including free agent deals to Christian Kirk and Zay Jones. They, along with returnees Marvin Jones and Laviska Shenault, are in line to form the receiver nucleus for QB Trevor Lawrence. While that group has led (in part) to the optimism now surrounding the team, Treadwell will now need to find a new home as roster cuts continue. He could carry slightly more upside than other free agents given his age (27), but he will be hard-pressed to land anything more than a ‘prove-it’ contract at this point.

One of the few positive developments to come out of the Jaguars’ 2021 season: a career-high receiving total from Laquon Treadwell. While the former first-round pick has never lived up to that billing, he is now signed to play a seventh NFL season.

Treadwell will return to the Jaguars on a one-year deal, Tom Pelissero of NFL.com tweets. He will be part of a new-look wideout group, with the Jags having signed Christian Kirk and Zay Jones. The Jags have announced the Treadwell signing.

The 6-foot-2 possession receiver caught 33 passes for 434 yards and a touchdown in his first Jacksonville campaign. A former Vikings first-rounder, Treadwell had bounced on and off rosters since Minnesota cut him in 2019. Treadwell, 26, caught just 15 passes from 2019-20 but will have another opportunity to be a role player with the Jaguars.

Jacksonville will transition to Doug Pederson‘s offense and do so with mostly new pass catchers. Kirk is set to slide in as Trevor Lawrence‘s new WR1, while Jones and Evan Engram will play key roles as well. The team still has Marvin Jones under contract, and Laviska Shenault also remains on the team. D.J. Chark defected to the Lions in free agency. The Jags may not be done at the receiver position, with the draft looming as an obvious augmentation opportunity for the rebuilding team. But they have done extensive work on the position in free agency.