The Lions have brought back another player they were impressed with in 2021, this time on the defensive side of the ball. Linebacker Josh Woods has re-signed with Detroit, per a team announcement. David Birkett of The Detroit Free Press adds that it is a one-year deal.

The 25-year-old began his career with the Bears, signing there as an undrafted free agent in 2018. He played as a safety during a four-year college career at Maryland, but transitioned to linebacker to try and latch onto an NFL roster. He played 46 total defensive snaps in Chicago, but established himself as an effective special teamer during his time there.

Woods signed with the Lions this past September, off of the Bears’ practice squad. While he still primarily played on special teams – quickly emerging as one of the team’s best players in that role – he did start to see time on defense. After injuries to starters Alex Anzalone and Jalen Reeves-Maybin, he saw the heaviest workload of his career, making a team-leading 13 tackles in Week 14. Not long after, though, he suffered a season-ending neck injury.

With both Anzalone and Reeves-Maybin set to be free agents, Birken notes that “Woods could compete for time on defense next season”. While the team does intend to keep Anzalone in particular, Woods’ play in the Motor City has earned him at least one more season of trying to establish a full-time defensive role. 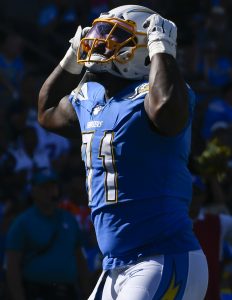