Two years ago, injuries decimated the Dolphins’ running backs room, leading to Miami turning to two former Washington Huskies: Myles Gaskin, drafted in the seventh round of the 2019 NFL Draft, and Salvon Ahmed, an undrafted rookie in 2020. After some eventual health and free agent additions over the following two years, it’s looking like Gaskin and Ahmed may be battling for a roster spot, according to ESPN’s Marcel Louis-Jacques. 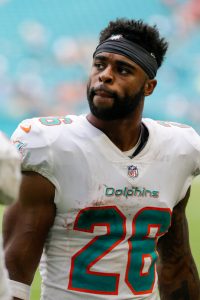 In the 2020 NFL season, Gaskin and Ahmed were the teams two leading rushers in terms of yardage. Gaskin led the team with 584 yards on 142 attempts, while Ahmed was second on the team with 319 yards on 75 carries. Both had three rushing touchdowns, trailing only Jordan Howard who scored touchdowns on 4 of his 28 carries.

Ahmed’s rookie season saw him start four games. Two of those starts still hold as his best career games. His first career start saw him run for 85 yards on 21 carries with a touchdown. His third start, five weeks later, saw him rush for 122 yards on 23 carries while scoring his second touchdown of the season.

In 2021, Ahmed was relegated back to a backup role. Gaskin started the most games for the Dolphins with 10 while Duke Johnson, now with the Bills, and Malcolm Brown, currently a free agent, started the seven remaining games. Regardless of starts, Ahmed still finished third on the team in carries and rushing yards behind only Gaskin and Johnson.

The 2022 offseason saw the Dolphins go shopping in the free agent market, signing three new running backs to the roster. Raheem Mostert will return to his home-state after spending just over five seasons on the opposite coast in San Francisco. After a 2019 season in which Mostert led the 49ers in rushing yards without starting a single game, he was tabbed as the starter the following two seasons but only played in nine games with both of those years getting cut short due to injury. Chase Edmonds will have a chance to compete for the starting job in Miami after serving as the No. 2 running back behind the likes of Kenyan Drake and James Conner during his time in Arizona. Finally, Sony Michel will head back to the AFC East after a one-year hiatus in Los Angeles. Michel’s lone year with the Rams saw him return to form after an injury-plagued season in New England.

Michel has seen the most consistent success of the three, but Mostert has shown an ability to do more with less, touting a career 5.7 yards per carry, and Edmonds has shown effectiveness rushing and receiving out of the backfield for the Cardinals. It’s anybody’s guess who could end up starting for Miami at running back, but, with three solid options, Gaskin or Ahmed may find themselves in the dog house.

Both have served the Dolphins well in their short tenures, but Gaskin has had the clear preference over Ahmed in the past two seasons, being chosen to start over Ahmed and receiving 315 carries to Ahmed’s 129. Not to mention the fact that Gaskin offers much more to the passing game than Ahmed has so far in his career. Compared to Ahmed’s 23 career receptions for 178 yards, Gaskin has 97 catches for 673 yards and 6 touchdowns.

Miami has given Ahmed an opportunity not often afforded to young, undrafted players, but, sadly, everything above could be pointing to the end of his time with the Dolphins. I expect Ahmed to hang around through the preseason, given the injury history Miami has experienced at the position over recent years, but it’s hard to picture a scenario where the Dolphins hang on to five running backs or one where Ahmed is able to beat out one of the above four.

Ahead of their game against the Jets on Sunday, the Dolphins will have two of their top three running backs available. Myles Gaskin and Salvon Ahmed have been activated from the Reserve/COVID-19 list, reports Barry Jackson of the Miami Herald.

The move makes both players eligible to play against the Jets; Jackson adds that, “at least one, if not both, likely would play on Sunday”. Miami’s other options at the position include veterans Malcom Brown and Duke Johnson, as recent acquisition Phillip Lindsay remains in isolation due to COVID-19 protocol.

Gaskin has been the lead back for the Dolphins this season, posting 526 yards and three touchdowns on 154 carries, adding 45 catches for 217 yards and four touchdowns in the passing game. The 24-year-old’s 3.4 yards per carry have left the Dolphins wanting more from the ground game, though, leading to moves such as claiming Lindsay in November. Ahmed, meanwhile, has chipped in 266 total scrimmage yards in his second season in Miami.

Their return would be welcome against the Jets in particular, as New York has allowed just under 139 yards per game on the ground. That, coupled with the upcoming absence of standout rookie wide receiver Jaylen Waddle, should lend itself to plenty of rushing opportunities on Sunday.

Dolphins running back Phillip Lindsay has tested positive for COVID-19 (Twitter link via NFL.com’s Tom Pelissero). That completes an unfortunate hat trick for Miami as all three of their running backs — Lindsay, Myles Gaskin, and Salvon Ahmed — have tested positive in advance of Sunday’s game against the Jets. 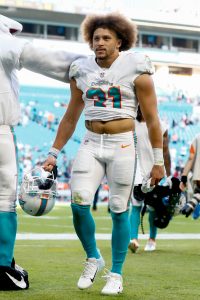 All three players are vaccinated, according to Pelissero, giving them a chance to suit up on Sunday pending additional tests. If they’re unable to play, the Dolphins will likely turn to practice squad RBs Duke Johnson and Gerrid Doaks.

The Dolphins are still fighting for a playoff berth, albeit with slim odds. Stationed at 6-7, the Dolphins currently have a 10% chance at sneaking into a Wild Card spot, according to the stats at Five Thirty Eight. A win over the Jets would keep the ‘Fins afloat — a loss would effectively rule them out of the postseason.

Lindsay, 27, hooked on with the Dolphins earlier this month after being released by the Texans. In his Week 12 debut against the Panthers, the veteran ran for 42 yards off of 12 carries. Gaskin finished with more yards in a less efficient performance — 49 yards off of 16 totes.

The Dolphins have placed left tackle Austin Jackson on IR due to a foot injury he suffered during Sunday’s loss to the Seahawks, as Barry Jackson of the Miami Herald reports (via Twitter). Although the rookie LT would be eligible to return after three weeks under the modified rules for 2020, Barry Jackson says in a full-length piece that head coach Brian Flores was non-committal when asked if Austin Jackson would be back this season. 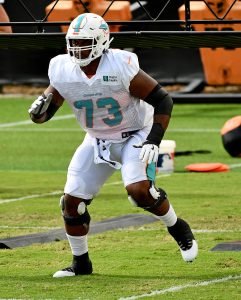 Indeed, Flores said the team is looking for a “long-term replacement” for Austin Jackson, so it sounds as if the USC product very well may miss the rest of the year. Though Miami has several options, Barry Jackson suggests that Julie’n Davenport — who filled in for Austin Jackson during the Seattle game and played well — might have the first crack at the LT job.

Austin Jackson was the second of three first-round choices that the Dolphins had in this year’s draft. He was thrown into the fire right away, and he acquitted himself reasonably well. He had not allowed a sack this season, and he recently earned praise from his position coach.

“Austin has had a great start to this season,” offensive line coach Steve Marshall said earlier this week. “He’s learning every time he’s going out there. I’m very excited for his future. He can be a heck of a pro offensive left tackle.”

Pro Football Focus’ advanced metrics considered Austin Jackson to be a below-average performer in terms of both run-blocking and pass-blocking, but he has certainly shown enough flashes to justify Marshall’s enthusiasm. One wonders if Austin Jackson’s absence will have any bearing on Flores’ decision as to when to insert rookie QB Tua Tagovailoa into the starting lineup.

To take Austin Jackson’s place on the roster, the Dolphins have promoted rookie running back Salvon Ahmed from the practice squad. As Barry Jackson observes (via Twitter), the team has liked what it has seen from the UDFA, though he will be joining a crowded RB depth chart.