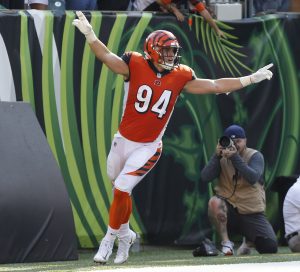 Receivers are dropping like flies. Just moments after we heard the Chargers were placing Dontrelle Inman on injured reserve, we got word of another wideout hitting the shelf. The Bengals are placing John Ross on IR, according to a tweet from Paul Dehner Jr. of The Athletic.

Dehner notes that the Bengals have promoted receiver Stanley Morgan from the practice squad in a corresponding roster move, and that it’s a sternocavicular injury for Ross. We heard yesterday that Ross was going to miss some time, but it was initially reported as something that would sideline him for around a month. Now, he’ll have to miss the next eight weeks at least. On the bright side Ross is expected back this season, and the injury had about a six-week timetable but the Bengals wanted to give him extra rest, tweets Mike Garafolo of NFL Network.

It’s a tough blow for Ross, and for the Bengals’ offense. The ninth overall pick of the 2017 draft, who had been written off by many as a bust, was finally starting to make an impact. Injuries and a lack of trust from Marvin Lewis had plagued Ross’ first two years in Cincy, but he had 270 yards through the first two games of this season and was starting to look like the elite deep threat he was supposed to be.

With A.J. Green still not set to return anytime soon, the Bengals’ 0-4 offense is in dire circumstances. Second-year seventh-round pick Auden Tate will now be asked to play a big role moving forward. Morgan is an undrafted rookie from Nebraska who was waived at final cuts.