The Steelers have added some depth to their offensive backfield. The team announced on Tuesday that they have signed Jeremy McNichols.

The former fifth-rounder bounced around quite a bit early in his career. By far the largest workload he has received to date has come during his two years with the Titans, though. Between 2020 and 2021, he logged 88 carries for 360 yards and one touchdown. McNichols stood out in the passing game as well, adding 295 yards on 40 catches in Tennessee.

The 26-year-old had the opportunity to become the team’s lead back after Derrick Henry‘s injury, but D’Onta Foreman wound up being the primary beneficiary of the increased snaps. After the Titans made some changes to their RBs room, McNichols was on the move once again in free agency, initially signing with the Falcons. By the middle of last month, though, he found himself on waivers and in need of a new home.

The Steelers, meanwhile, have been in the market for depth at the position. While Najee Harris is in line to remain the focal point of Pittsburgh’s offense and shoulder one of the heaviest workloads in the NFL, increased competition for backup spots will be in order. McNichols will look to carve out a role for himself on a depth chart also featuring Benny Snell and Anthony McFarland Jr. The way the team’s backfield shakes out in camp will be an intriguing storyline within their new-look offense.

Although Harrison has been in the NFL since 2014, he has not played in a regular-season game in three years. The former Colts and Jets starting center has spent the past two years bouncing on and off the Giants’ practice squad. Harrison, 30, caught on with the Giants in 2020 but did not play in a game for the team. The former UDFA has started 42 regular-season, including 10 as a rookie for a Colts team that ventured to the AFC championship game and 10 in 2019 with the Jets.

The Falcons signed McNichols earlier this offseason. The rebuilding NFC South squad does not feature much in the way of high-level investments in the backfield, but it did use a fifth-round pick on BYU’s Tyler Allgeier and sign Damien Williams earlier this offseason. Also re-signed, Cordarrelle Patterson is expected to begin the season as the team’s starter.

McNichols, 26, played in 30 Titans games over the past two seasons. He received a look to be the team’s primary Derrick Henry replacement last season, but that role ended up going primarily to D’Onta Foreman.

A former Bears UDFA in 2019, Dalton has not played in a regular-season game. He joined Harrison at this week’s tryout. Trammell, who caught on with the Falcons as a 2021 UDFA, played in two games for the team last season.

The Falcons have added depth to their running back room. The team announced on Thursday the signing of journeyman Jeremy McNichols.

The 26-year-old was a fifth round pick of the Buccaneers in 2017. He never played for Tampa in the regular season, however, failing to make the team during his rookie season. Instead, he went to San Francisco, though he only made two appearances for the 49ers.

That was followed by a plethora of short stints across the league, as he bounced on and off of teams’ practice squads. In 2018, he played in a single game for the Colts; that was also the case one year later in Jacksonville. It wasn’t until he signed with the Titans (for the second time in his career) in 2020 that he began playing on a full-time basis.

The Boise State alum averaged 4.3 yards per carry that season, totalling 204 rushing yards. His play earned him a spot on Tennessee’s roster again this past campaign, which saw him put up better numbers. Seeing a larger workload after the injury suffered by Derrick Henry, McNichols became a factor in the passing game, posting 240 receiving yards. Not long after suffering a concussion, however, he was waived.

In Atlanta, McNichols will look to again prove himself as a viable contributor at the end of the roster. Much of the team’s offense will be centered on Cordarrelle Patterson, of course, and the Falcons added Damien Williams earlier in free agency. Still, after the release of Mike Davis, McNichols will have the chance to compete for the No. 3 role.

Although a Derrick Henry return in Week 18 surfaced as a possibility weeks ago, the Titans will remain cautious with the two-time reigning rushing champion.

Tennessee will not activate Henry from IR on Saturday, keeping him shelved until the playoffs. The Titans designated Henry for return this week, giving them options moving forward. Henry’s ramp-up period can last up until before the AFC championship game, should the Titans’ season extend that far. But the team has long been preparing to have its top weapon ready to go before that point.

Henry has been out since suffering a Jones fracture in his foot in Week 8. The Titans initially struggled to pick up the pieces, and they moved on from Adrian Peterson fairly quickly. However, the AFC South champs have since seen D’Onta Foreman — also a midseason pickup following Henry’s injury — begin to establish himself as a starter. Foreman has notched three 100-yard games over his past five. Should Henry indeed return to action in the playoffs, Foreman would stand to be a key off-the-bench performer.

For now, however, the Titans are reshuffling their backfield. One of the early candidates to replace Henry, Jeremy McNichols, is no longer on the roster. The Titans waived the veteran backup Saturday and promoted Jordan Wilkins from their practice squad. A former Colts fifth-round pick, Wilkins caught on with the Titans after a midseason Indianapolis exit. He joins Dontrell Hilliard alongside Foreman on Tennessee’s active roster.

Wilkins topped 5.5 yards per carry in each of his first two seasons, playing behind Marlon Mack, and eclipsed 300 rushing yards in each of his first three. Now rostering the NFL’s rushing leader in Jonathan Taylor, the Colts dropped Wilkins this season. A former Buccaneers fifth-round pick who also spent time with the Colts, McNichols has been with the Titans for the past two seasons. He is averaging just 3.8 yards per carry this year, on 41 totes, and saw Foreman take over the backfield down the stretch.

The Titans also promoted defensive linemen Da’Shawn Hand and Kevin Strong on Saturday. The team has a chance to clinch home-field advantage for the first time since 2008 Sunday. A win over the Texans would secure Tennessee the AFC’s No. 1 seed. This would obviously be beneficial for both the Titans and Henry. The Chiefs would recapture the conference’s top slot with a win over the Broncos today and a subsequent Titans loss.

The Titans have already lost Derrick Henry for the foreseeable future, and they could be down another RB this weekend. According to ESPN’s Field Yates (via Twitter), Titans running back Jeremy McNichols is in concussion protocol and didn’t practice today. As a result, there’s a chance McNichols could end up missing this weekend’s contest.

When all is said and done, McNichols will end up collecting career highs across the board in 2021. The former fifth-round pick has compiled 284 yards and one touchdown on 43 touches through the first chunk of the season. Since Henry went done with an injury, McNichols has gotten 11 carries, surpassing the seven carries he got through the first eight games. The 25-year-old has also been a threat in the passing game, hauling in 25 receptions this year.

The Titans have already been scrambling to fill their depth chart. The team got an encouraging performance from D’Onta Foreman last weekend, and there’s a good chance he’ll see a significant role on Sunday. The team is also rostering Adrian Peterson, who’s garnered the bulk of the team’s red zone carries over the past two weeks.

If McNichols is forced to miss this weekend, the Titans could choose to promote running back Dontrell Hilliard from the practice squad. 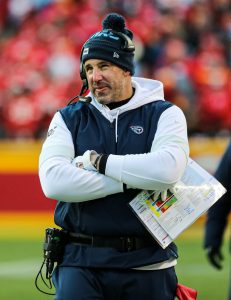