After it was thought he would be heading elsewhere, the Cowboys are set to retain their punter. NFL Network’s Ian Rapoport reports (on Twitter) that Bryan Anger is signing a three-year, $9MM contract with Dallas. The punter received a $2.4MM signing bonus and will have a 2022 cap hit of $2.2MM, per ESPN’s Todd Archer (on Twitter). The team has confirmed the move. 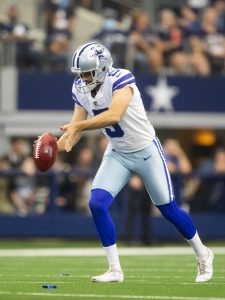 Anger, 33, joined the Cowboys on a one-year deal last season. He was actually one of the team’s final cuts before the season started, but they brought him back in time to play every game. The $3MM-per-season average of this contract is a sizeable raise from the $1.075MM he played for in 2021.

The Cal alum was a third round pick of the Jaguars in 2012. He played for four seasons in Jacksonville, leading the league in average yards per punt in 2014. That was followed by a three-year stint in Tampa Bay, where he was used less frequently but maintained a high degree of effectiveness and consistency. He spent 2019 and 2020 with the Texans.

This past campaign, Anger enjoyed a career year. He set a new personal mark in terms of punting average (48.4 yards). As well, he broke the Cowboys’ franchise record for net average at 44.6 yards per punt. That performance earned him his first career trip to the Pro Bowl, along with second team All-Pro honors.

From a financial standpoint, that led some to believe Anger would be on the move again. Before free agency began, Michael Gehlken of The Dallas Morning News reported (via Twitter) that he was “unlikely to return to Dallas”. Now, however, the team has found the money to keep one of their best players from last year in the fold.

The Cowboys are signing Bryan Anger to a one-year deal (Twitter link via NFL.com’s Mike Garafolo). The veteran punter is now set for a training camp competition Hunter Niswander for the job.

The Cowboys have been on the hunt for a new punter ever since releasing Chris Jones in March. Previously, Jones was set to enter the final year of the four-year, $8.7MM extension he inked in 2017. At the time of signing, Jones had the team’s’ all-time highest percentage of punts downed inside the 20 with 39.9% (113 of 283). He had also been with the club for years while posting a solid 44.5-yard average. Unfortunately, that dipped to ~42 ypp over the last two years. Then, he missed the latter half of 2020 with an abdominal injury.

Anger, meanwhile, has spent the last two years with the Texans, where he cleared 46 yards per punt in each campaign. But, last month, Houston cleared his contract from the books to save $2MM against the cap. Anger has also spent time with the Buccaneers and Jaguars, but he’s perhaps best known for being a punter that was drafted in the third round.

Amid the considerable changes to the Texans’ setup this offseason, they will move on from their punter of the past two years. The Texans are releasing Bryan Anger, per Ian Rapoport of NFL.com (on Twitter).

Anger, who signed with Houston during Bill O’Brien‘s short but memorable stay as GM, has played nine NFL seasons. The team will save just more than $2MM in cap space by moving on.

Known primarily for being a former third-round pick, with the Jaguars having taken him in 2012, Anger has played in Jacksonville, Tampa and Houston. He cleared 46 yards per punt in each of his two seasons with the Texans.

The Texans will be without a major offensive weapon when they open the playoffs against the Bills this afternoon. Aaron Wilson of the Houston Chronicle reports (via Twitter) that wideout Will Fuller will not play today as he continues to recover from his groin injury.

Fuller suffered the injury during Houston’s Week 16 victory over the Buccaneers. There was some optimism that the 25-year-old would be ready to return for the playoffs, but the groin injury will sideline him for at least another week. The former first-rounder finished the 2019 regular season with a career-high 49 receptions for 670 yards and three touchdowns.

With Fuller out of the lineup, Wilson suggests that receiver Keke Coutee will be active for today’s game.

Let’s check out some more notes out of Houston…

Bryan Anger has secured a long-term deal. NFL.com’s Ian Rapoport reports (via Twitter) that the Texans have signed the punter to a three-year extension. The deal is worth $7.5MM, per Mark Berman of Fox 26 (on Twitter).

Anger immediately made a name for himself when the Jaguars selected the California product in the third round of the 2012 draft (that was the highest a punter had been drafted since Todd Sauerbrun in 1995). Anger earned a number of rookie honors in 2012, but he never emerged as one of the league’s top punters during his four-year stint in Jacksonville.

After spending three seasons with the Buccaneers, Anger signed with the Texans this past offseason. He was cut by the team at the end of the preseason, but he re-signed with the squad in mid-September. The 31-year-old has proceeded to appear in 13 games for Houston, averaging 46.2-yards on his 40 punts. His 44 opponent return yards is by far the lowest mark of his career.

The Texans have signed veteran punter Bryan Anger, according to a team announcement, and Tom Pelissero of NFL.com tweets that it is a one-year, $1MM pact. In a related move, Houston waived UDFA linebacker Drew Lewis.

The Buccaneers cut Anger in May, thereby saving $3MM against the cap. At the end of the 2016 season, Anger signed an extension with Tampa Bay that would have kept him under club control through 2021, but the Bucs elected to move forward with Bradley Pinion instead.

Aaron Wilson of the Houston Chronicle makes it sound as if Anger was signed merely for camp depth, as he suggests that second-year player Trevor Daniel will remain the starter. However, Sarah Barshop of ESPN.com tweets that Anger and Daniel will compete for the job.

Anger, a former third-round pick of the Jaguars who was selected ahead of players like Russell Wilson and T.Y. Hilton, spent the first four years of his career in Jacksonville before signing with Tampa Bay in March 2016. He has a net average of 40.6 yards per kick for his career.

The Buccaneers will release punter Bryan Anger, per Ian Rapoport of NFL.com (via Twitter). Anger was the fourth highest-paid punter in the league and was due $3MM in 2019. There was no guaranteed money left on the five-year extension he signed at the end of 2016, so Tampa Bay will shave the full $3MM from its cap.

Tampa Bay will replace Anger with Bradley Pinion, as Rick Stroud of the Tampa Bay Times tweets. Pinion spent the first four years of his career with the 49ers after being selected by San Francisco in the fifth round of the 2015 draft.

Both Pinion and Anger were near the bottom of the league in terms of net yards per punt in 2018. Pinion was marginally more effective in pinning opponents inside their 20, but not demonstrably so. Neither player has received a Pro Bowl nod in their careers.

Bryan Anger will be staying in Tampa Bay for the foreseeable future. Rick Stroud of the Tampa Bay Times reports (via Twitter) that the punter has signed a five-year, $17MM extension with the organization. The extension will presumably keep Anger under contract through the 2021 season. The veteran’s $3.4MM average annual salary ranks in the top-5 among NFL punters (via Stroud).

“We brought Bryan here this past offseason believing he had the ability to be one of the best punters in the NFL and he performed as such in 2016,” said general manager Jason Licht (via the team’s website). “We are always happy to reward our own players and thrilled to be able to keep Bryan with the Buccaneers for years to come.”

Anger joined the Buccaneers this offseason after spending the first four seasons of his career with the Jaguars. A third-round pick in 2012 (Anger was selected ahead of players like Russell Wilson and T.Y. Hilton), the special-teamer averaged 46.8 yards per punt during his tenure in Jacksonville. Despite the relative success, the Jaguars ultimately decided to move on from Anger and sign punter Brad Nortman.

Despite the presence of punter Jake Schum, the Buccaneers decided to add Anger on a one-year contract. The veteran punter also received interest from the Panthers while he was a free agent.

This decision certainly benefitted the Bucs, as Anger is having one of the best seasons of his career. Despite “only” averaging 45.9 yards per punt, the 28-year-old has established career-bests in net average punt (42.4), punts inside the 20 (32), returns (23), and return yards (128). Anger is on track to set several franchise records, and he earned a role as a Pro Bowl alternate for his performance.