The Cowboys have restructured quarterback Dak Prescott‘s contract to create roughly $15MM in cap space, per a club announcement. Meanwhile, they’ve also reworked the contract of guard Zack Martin to free up an extra ~$7MM in room. Between the two moves, the Cowboys have an additional $22MM to work with in advance of free agency. 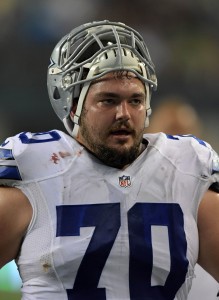 This appears to be a simple restructuring — one that converts 2022 base salary into a signing bonus. Prescott has done this before, agreeing to tweak his contract last year to give Dallas an extra $5MM in space.

Injuries limited Prescott to just five games in 2020, but he managed to play in 16 games last year. He finished the year with an 11-5 record in his starts with 4,449 yards and 37 touchdowns against ten interceptions. That marked the best TD% of his career to date (6.2). Statistically, that’s what the Cowboys were hoping for when they inked him to a four-year, $160MM extension in March of ’21. His contract — which made him the league’s second-ever $40MM/year player — remains largely the same after today’s adjustment.

Martin, a seven-time Pro Bowler, missed six regular season games in 2020 with a calf injury. In 2021, he bounced back strong with 16 starts and yet another All-Pro nod.

Cowboys guard Zack Martin has been placed on the Reserve/COVID-19 list, per a club announcement. That means Martin is a no-go for Thursday night’s season opener against the Buccaneers and possibly longer, depending on when he clears protocol. 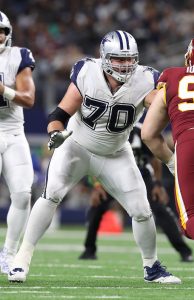 [RELATED: Cowboys Out On Cam Newton]

Scores of players were sidelined by positive tests last year, but Martin is the first NFL player to be ruled out of a game in 2021. If Martin is vaccinated, he could be eligible to return after two negative test results. However, if he’s not vaccinated, he will be required to keep his distance for a minimum of ten days.

Martin, a six-time Pro Bowler, missed six regular season games last year with a calf injury. The Cowboys are counting on his availability, especially with La’el Collins‘ early season status in limbo. Without Martin, the Cowboys will likely slot Connor McGovern into the starting lineup. Fortunately, they’ll have Connor Williams on the opposite side — he was just recently cleared from his own COVID-19 list stint.

In other Cowboys news, it doesn’t sound like Cam Newton will be with Dallas on Thursday either. Despite speculation to the contrary, they’re not going to pursue the recently released Patriots quarterback. Ditto for the Washington Football Team — they’re ready to roll with Ryan Fitzpatrick, Taylor Heinicke, and Kyle Allen.

The Cowboys have placed guard Zack Martin on injured reserve with a calf injury. The All-Pro guard must be shelved for at least three games and this could very well mark the end of his season.

In the dreadful NFC East, the playoffs are still possible for the 3-8 Cowboys. Their late-November loss to the Washington Football Team didn’t help matters, but they could still theoretically leapfrog the first-place Giants (5-7) and the rest of the division. They’ll have their work cut out for them on Tuesday night against the Ravens, when undrafted lineman Terence Steele is expected to start in his place.

Martin has done his best work on the interior, but Steele’s poor play forced the Cowboys to reshuffle the front five a few weeks back. Before they made the swap on Nov. 22, Steele ranked as the worst offensive tackle out of 78 qualified players this season, per Pro Football Focus’ metrics.

The Cowboys will also be without cornerback Anthony Brown and safety Donovan Wilson as they look to upset Baltimore. A loss — even in the NFC East — would almost certainly take them out of the postseason conversation.