The former fifth-round pick has two years remaining on his rookie contract. He will head to a Texans team featuring less talent at the receiver position compared to the Bucs’ three-Pro Bowler (feat. Russell Gage) setup.

Tampa Bay added Gage and Julio Jones this offseason, doing so after franchise-tagging and extending Chris Godwin. Mike Evans remains as well. Breshad Perriman also remains with the Bucs. Tampa Bay’s receiver reload, in what could be Tom Brady‘s final season, left Johnson with a tougher-than-expected climb back to the 53-man roster.

A Minnesota alum, Johnson showed growth in his second season. He caught 36 passes for 360 yards in Year 2. While the presences of Godwin, Evans and, when available, Antonio Brown impacted Johnson’s status, he served as an intriguing depth piece in Tampa. In Houston, the 206-pound pass catcher should have more room for growth.

The Texans extended Brandin Cooks this offseason, shutting down trade rumors, and have 2021 third-rounder Nico Collins in place as Cooks’ top sidekick. But Johnson could profile as a Davis Mills tertiary target soon.

Widely thought to be facing a roster crunch at the receiver position, the Buccaneers have moved on from a notable name buried down the depth chart. Tampa Bay is waiving Tyler Johnson, reports Greg Auman of The Athletic (Twitter link). 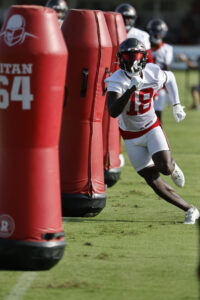 The 2020 fifth-rounder had a modest rookie season, recording 169 yards on 12 receptions. He took a step forward in terms of production last year, notching 36 catches for 360 yards. Still, he faced a long list of names ahead of him in the pecking order amongst Tampa’s other pass-catchers.

Already touting one of the league’s best WR tandems with Mike Evans and Chris Godwin, the Buccaneers made a pair of significant additions in free agency this offseason. The arrivals of Russell Gage and, more recently, Julio Jones, left the team with a well-defined group at the top of the depth chart. That left Johnson among several noteworthy wideouts in danger of finding themselves on the roster bubble.

It was reported earlier this month that the undrafted trio of Jerreth Sterns, Deven Thompkins and Kaylon Geiger would the make position’s logjam even harder to clear. Those three, especially given their ability to contribute on special teams, left the statuses of incumbents like Johnson and Cyril Grayson in doubt. The latter had already been waived, and 2019 sixth-rounder Scotty Miller could join them.

Tampa Bay has plenty of firepower in the passing game still, and will see just under $2MM in cap savings with this move. Johnson, meanwhile, will be a name to watch on the waiver wire given his age and draft status.

The Buccaneers are chipping away at their rookie class. Sixth-round defensive tackle Khalil Davis has agreed to terms, according to Greg Auman of The Athletic (on Twitter). Meanwhile, fifth-round wide receiver Tyler Johnson has formally inked his deal, per an announcement from his agency (via Twitter). 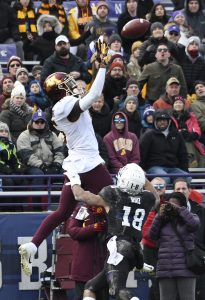 The Bucs sent several scouts to the 2020 Outback Bowl between Minnesota and Auburn. At that game, they watched Johnson turn in the best game of his collegiate career – 12 catches for 204 yards and two touchdowns. Clearly, that left an impression. With the No. 161 overall pick, they snagged Johnson to help round out their WR group. This summer, he’ll look to carve out his spot on the depth chart behind stars Mike Evans and Chris Godwin.

Davis, meanwhile, figures to support starting nose tackle Vita Vea. Even though he was a late pick, the Bucs are high on Davis’ skillset – at 308 pounds, he managed to run the 40-yard-dash at 4.75 seconds, good for sixth among all defensive linemen at the combine.

Here’s the full rundown of the Bucs’ class, via PFR’s 2020 NFL Draft tracker: