The Packers ruled out veteran wide receiver Sammy Watkins yesterday as he deals with hamstring issues, but they took the ruling a step further today as the team placed him on injured reserve. The new ruling means that not only will Watkins miss tomorrow’s game against the Buccaneers, but quarterback Aaron Rodgers will have to wait four weeks to get his top receiver back. 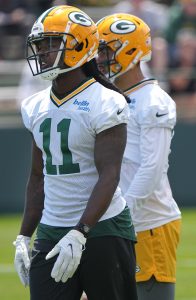 Watkins has seen a bit of a resurgence so far in his ninth NFL season. The 29-year-old has led the Packers in receiving yards through the first two games with six catches for 111 yards. Watkins’ resurgent season has seen the benefit of Rodgers’ top returning target, Allen Lazard, missing Week 1 as he deals with an ankle injury. He also has taken advantage of his competition for targets being rookies and a 32-year-old Randall Cobb. Regardless, Watkins has made the most of his early opportunities and the Packers will have to make up for some lost production in his absence.

Lazard has been cleared to play but is still dealing with that ankle injury. Rookie Christian Watson joins Watkins in his hamstring issues and Cobb has not practiced recently due to illness. Both are currently listed as questionable. Beyond those four, Rodgers will have to rely on two more rookies in Romeo Doubs and Samori Toure, second-year return specialist Amari Rodgers, and practice squad gameday call-up Juwann Winfree.

Watkins dealt with hamstring issues during his lone season in Baltimore last year, as well, missing four games and being mostly held out of the final three. He’s never quite been the portrait of health. Watkins hasn’t played in every game of the regular season since his rookie year back in 2014. Since then, he’s missed an average of four games per season. Watkins will be eligible to return to play in time for the Packers Week 7 matchup with the Commanders.

Packers Not Expected To Activate Marquez Valdes-Scantling For Week 8

The Packers extended their win streak from three to six games without Marquez Valdes-Scantling, who has missed the mandatory three weeks while on IR. But Green Bay’s wide receiver situation suddenly looks dire ahead of its Week 8 matchup with Arizona.

Davante Adams and Allen Lazard are out for Thursday night’s game, and ESPN.com’s Jeremy Fowler tweets Valdes-Scantling is looking unlikely to be activated by this afternoon’s deadline. MVS made the trip and became eligible to come off IR this week. But the contract-year wide receiver may have 10 more days to recover from the hamstring injury that sent him to IR.

Green Bay placed Adams and Lazard on its reserve/COVID-19 list on Monday and Tuesday, respectively. Adams tested positive for the coronavirus, while Lazard landed on the virus list as a high-risk close contact — a distinction only pertaining to unvaccinated players in 2021. Adams is vaccinated but did not complete the two negative tests required to return to action.

Adams has served as Green Bay’s No. 1 wide receiver for years, and his 744 receiving yards lead the 2021 Packers by a staggering total. Aaron Jones and Lazard have 186 and 184, respectively. MVS serves as the Packers’ top deep threat, having led the NFL in yards per reception (20.9) last season.

This trio being sidelined leaves Randall Cobb and rookie Amari Rodgers as Aaron Rodgers‘ top wideout options, though Jones certainly factors into this equation alongside tight end Robert Tonyan. The Packers are also elevating wideout Juwann Winfree for tonight’s game, Mike Garafolo of NFL.com tweets. A 2019 Broncos sixth-round pick, Winfree has played in three Packers games over the past two seasons but has yet to record a regular-season reception.