We learned yesterday that wide receiver and special teams ace Jamal Agnew was likely going to miss the rest of the season, and it sounds like the Jaguars have already found a replacement. Jacksonville is signing wideout and returnman Jaydon Mickens off the Buccaneers practice squad, reports Greg Auman of The Athletic (on Twitter). 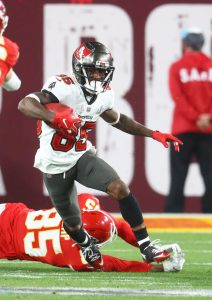 This will be a bit of a homecoming for Mickens, who made his NFL debut (and ultimately spent two years) with the Jaguars. The wideout has been with the Buccaneers since the 2019 campaign, and he got into 10 games for the Super Bowl champs last season. He served as one of Tampa Bay’s top returners, collecting 16 punt returns and 14 kick returns. He also had 15 combined returns in the playoffs. Mickens also got some run on offense, hauling in seven catches for 58 yards.

The 27-year-old has bounced on and off the Buccaneers’ active roster in 2021. He ultimately saw time in five games, returning five kicks and eight punts. Mickens last played during Tampa Bay’s Week 6 win over the Eagles.

Agnew suffered a hip injury during the fourth quarter of Sunday’s loss to the Niners, and he landed on injured reserve yesterday. Agnew has registered seven return touchdowns since 2017, more than any other player in the NFL. Two of those have come this year — he housed a 102-yard kickoff in Week 2 and returned a botched field goal try for a record 109-yard TD in Week 3. Mickens will be hard pressed to match those numbers, but he’ll still provide the Jaguars with an experienced option on special teams.