Chris Herndon has been hit with a significant ban. The free agent tight end has been suspended for eight weeks, reports ESPN’s Field Yates (on Twitter). That means Herndon will be banned from taking the field for the rest of the 2022 campaign.

We’ve yet to hear a reason for Herndon’s latest suspension. The tight end was previously banned for four games during the 2019 season for violating the league’s policy on substances of abuse.

Herndon was a fourth-round pick by the Jets back in 2018. He had his most productive professional season as a rookie, finishing the year with 39 receptions for 502 yards and four touchdowns. That aforementioned suspension (plus a hamstring injury) knocked him out for the beginning of the 2019 campaign, and he only got into one game that season before landing on injured reserve with a broken rib.

He managed to return for the 2020 season and got into all 16 games (13 starts) for the Jets, finishing with 31 receptions for 287 yards and three scores. Prior to the 2021 season, Herndon was packaged with a sixth-round pick and sent to the Vikings for a fourth-round selection. The tight end started five of his 16 games for Minnesota in 2021, hauling in only four catches for 40 yards and a touchdown.

Herndon joined the Saints this past August but was cut before the end of the preseason. The 26-year-old hasn’t had any reported workouts during the 2022 season.

Chris Herndon‘s latest bounce-back bid left him on the outside looking in as the Saints made their second round of cuts. They released the fifth-year tight end Tuesday, Katherine Terrell of ESPN.com tweets.

The Saints’ move down to 80 players also included the placement of wide receiver Kevin White on IR. White, who played six games for a receiver-depleted New Orleans squad last season, signed a reserve/futures deal to stay with the team in January.

New Orleans added Herndon just after the start of training camp, but the former Jets starter has not shown too much since his rookie-year breakout. A 2019 suspension and an injury soon after stalled Herndon’s momentum after his 502-yard rookie year in New York. He has not topped 300 yards in a season since and only caught four passes while with the Vikings last year.

Injuries have defined White’s NFL career. While the former No. 7 overall pick has done well to hang around this long, he has been an afterthought since multiple major injuries wrecked his Bears run. White, 30, missed all of his 2015 rookie season and only played five Bears games from 2017-18. He has since caught on with the 49ers and Saints, suiting up as a backup.

Chris Herndon will make his way to a third NFL team. The former Jets starter and Vikings contributor will join the Saints, according to Ian Rapoport of NFL.com (on Twitter).

This will be another new start for Herndon, whose market was quiet after his lone Minnesota season. The Jets shipped Herndon to the Vikings, who had recently lost Irv Smith Jr. for the season, prior to Week 1 last year. Herndon, 26, caught just four passes for 40 yards in 2021, seeing Tyler Conklin — whom the Jets signed this year — take over as the team’s top tight end.

A former fourth-round pick, Herndon is best known for his productive rookie season with the Jets. The Miami alum caught 39 passes for 502 yards and four touchdowns, helping fellow rookie Sam Darnold in 2018. But Herndon has not been able to follow that up.

The 6-foot-4 pass catcher began the 2019 season suspended for a personal conduct policy violation and suffered a hamstring injury while preparing for that truncated slate. In Herndon’s one 2019 game, he suffered a fractured rib. In 2020, Herndon struggled to find the form of his rookie year, totaling just 287 receiving yards.

The Saints have ex-third-rounder Adam Trautman (263 receiving yards in 2021, most among Saints tight ends) going into his third season and have moved Taysom Hill out of the quarterback conversation. The ex-starter is still expected to factor in on gadget plays as a QB, but his primary position will be tight end. Juwan Johnson, who led Saints tight ends in TDs last year with four, is also on the roster.

New Orleans also considered another former Viking, MyCole Pruitt, with Aaron Wilson of ProFootballNetwork.com noting the veteran tight end worked out for the team (Twitter link). Pruitt’s Minnesota days came back in the mid-2010s, however. He spent the past four seasons with the Titans, working more as a blocking tight end.

In the wake of Irv Smith Jr’s knee injury, the Vikings are making a significant move at tight end. Minnesota is making a trade for the Jets involving draft pick compensation for tight end Chris Herndon.

The Jets are sending Herndon and a 2022 sixth-round pick to the Vikings for a 2022 fourth-round pick (via Tom Pelissero on Twitter).

Smith was supposed to take over as the team’s starter after the offseason departure of longtime starter Kyle Rudolph, but we heard just a couple of days ago that Smith was having surgery for a meniscus injury that will sideline him for the early part of the season.

The depth chart got pretty thin after that, so some sort of move was always likely. Herndon was a fourth-round pick of the Jets in 2018, and he flashed major potential as a rookie. In his first year as a pro he put up 502 yards and four touchdowns, very impressive numbers for a rookie tight end.

Unfortunately he was suspended for the first four games of 2019 for a substance abuse policy violation, and then played in only one game that year after hurting himself. He returned to play all 16 games last year, but had only 287 yards as the Jets’ whole passing game struggled.

He’s still only 25 and has always been talked about as a potential breakout guy, so the addition makes a lot of sense for the Vikings. It’s also a big opportunity for Herndon as he’s set to hit free agency for the first time next offseason. The Jets will now move forward with Tyler Kroft as the unquestioned starter at tight end.

Jets To Start Morgan Moses At RT, Tyler Kroft Could Start At TE?

On a quiet Tuesday afternoon, we’ve got news on a couple of Jets position battles to pass along. New York just signed tackle Morgan Moses on Friday, and the initial assumption was that he might compete with George Fant to be the Jets’ right tackle opposite Mekhi Becton. 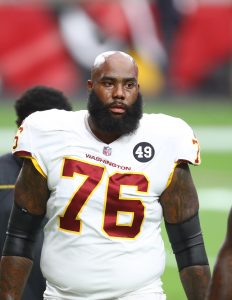 Apparently, it won’t be much of a competition. “Even if the Jets tout this as a competition, Moses is the starting right tackle,” Brian Costello of the New York Post writes. He says the team “might try to sell this as a competition in training camp to soothe Fant’s ego and also avoid the embarrassing questions about paying a backup tackle an $8.5 million salary,” but that Moses will be the starter when it’s all said and done.

Moses got a $3.6MM base with incentives up to $5.3MM on his one-year deal. He was cut by Washington last month after not missing a start in six straight seasons for them. Meanwhile, Costello writes in a separate piece that Tyler Kroft may end up as the team’s starting tight end.

He says Kroft “has been one of the bigger surprises of the spring,” has received plenty of reps with the first-team in practices, and “could beat out Chris Herndon for the job if Herndon does not shake out of the funk he was in last year.”

The Jets didn’t get much from the position last year, (Herndon had 31/287/3 in 16 games), so it’s not shocking they’re considering other options. Kroft didn’t do too much with Buffalo the last couple years, but he had 42/404/7 when he was last a starter with the Bengals in 2017. He signed a one-year deal with the Jets back in March.

Chris Herndon‘s second NFL season may end up including just one game. Adam Gase said Monday the promising tight end suffered a fractured rib in his Week 10 debut, per Manish Mehta of the New York Daily News (on Twitter).

Guard Brian Winters‘ season is also in jeopardy. The seventh-year blocker is unlikely to play again in 2019 after he suffered a dislocated shoulder, Gase said (via ESPN.com’s Rich Cimini, on Twitter). Surgery is in play for Winters, Cimini tweets. Shoulder trouble sidelined Winters over the summer, and Mehta notes (via Twitter) he has been playing through pain all season and was told to have surgery earlier. But Winters started all nine Jets games this season.

Herndon began his season with a four-game suspension but did not debut until Week 10 because of a hamstring injury. He may have 10 months before he can rebound. Two seasons remain on Herndon’s rookie deal. Winters, however, has a non-guaranteed $7MM remaining on his Jets pact. Considering how new GM Joe Douglas has proceeded with Mike Maccagnan offensive line investments, Winters may have played his final down as a Jet.

Winters is the longest-tenured Jets offensive lineman, beginning his career when Nick Mangold and D’Brickashaw Ferguson anchored the group. He’s made 79 starts for the Jets since joining the team as a third-round pick in 2013. Gang Green has already experienced issues across their O-line this season. They have shuffled players at left tackle, right tackle and left guard. Tom Compton took Winters’ place at right guard Sunday and figures to start in Week 11.

The Jets added Ryan Griffin as a Herndon stopgap this offseason, and the veteran will continue to play a key role in New York’s passing game. He’s caught 20 passes for 160 yards and three touchdowns. Herndon snared one pass Sunday. His 502 yards last season were the third-most most by a Jets rookie tight end.