Jets To Focus On Quinnen Williams’ Extension After Next Season

With the end of the 2021 NFL season signaling defensive tackle Quinnen Williams‘ eligibility to sign a contract extension to remain in New York, the intentions of both parties have become much more clear, according to Brian Costello of the New York Post. While early reports on the situation left room for doubt, positing that it made fiscal sense for the Jets to wait but could improve team-player relations for the Jets to pay, all the most recent signs indicate that New York will wait until after the 2022 season to attempt to extend Williams. 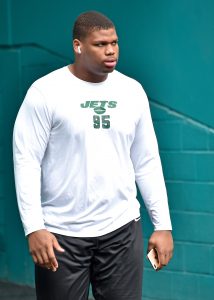 Despite not getting the line help from free agent addition Carl Lawson, Williams had a very good season, albeit a disappointing one for those who expected Williams to take his play to the next level under head coach Robert Saleh‘s new defense. Lawson’s absence caused offenses to focus on Williams, but the young defender still graded out as the 37th best interior lineman out of 109, according to Pro Football Focus. Williams was 28th in pass rush grading and 47th against the run last year while leading the team in sacks (6.0) and finishing second on the team in quarterback hits (12) and tackles for loss (7.0).

With Lawson out and offenses focused on Williams, defensive line teammates Folorunso Fatukasi and John Franklin-Myers both excelled their way to big paydays, with Fatukasi’s taking him to the sunny shores of Duval County. This year’s lineup sets up much better for Williams to breakout. With the departure of Fatukasi, the Jets will ask Sheldon Rankins to step up. Fatukasi earned starting time over Rankins last year due to his superior play on run defense, but Rankins was more successful in the pass rush, racking up 3.0 sacks to Fatukasi’s zero. On the ends, New York will not only add a healthy Lawson opposite Franklin-Myers, but will also bring in rookie first-round pick Jermaine Johnson II. On obvious passing downs, New York can substitute Franklin-Myers on the inside for Rankins and bring in Johnson on the end. Regardless of how they form it, the defensive line around Williams should set him up better for success.

Another factor that could lead Williams to his best season in a contract year is his own health. Williams was forced to have surgery to fix a broken bone in his foot in the spring of 2021. This caused him to miss all of the team’s spring practices and most of the Jets’ training camp. With a full offseason with Saleh under his belt, Williams should be fully prepared to excel in his fourth season.

In terms of the contract situation, things have been quiet. Williams is heading into his fourth season with the team, making him eligible for a contract extension. The Jets also picked up the fifth-year option on Williams’ rookie contract, ensuring he can stay with the team through the 2023 season. After that the franchise tag amount is not insane for defensive tackles, so New York could retain Williams through the 2024 season at a bargain price.

Though he’s never quite graded out like the best at his position, Williams will likely get paid like them when he eventually gets a new contract, due to his effectiveness and production. So it makes much more fiscal sense to keep paying Williams like a rookie for as long as the team feasibly can. Luckily for them, Williams has no problem with that. Williams and his agent, Nicole Lynn, “have not made noise about his contract this offseason.”

Williams has been consistent in affirming that money is not currently a driving factor for him. If he can have a career-year, though, on the eve of a new contract, Williams may let his play do all the negotiating he hasn’t bothered to initiate and can land a massive second contract as a free agent. For now, though, the Jets and Williams are content to wait it out.

Run-stuffing defensive tackle Folorunso Fatukasi moved into a full-time starting role last season and is now expected to generate considerable interest as a free agent. The four-year veteran started 15 games, after combining for eight starts in his first three seasons, and the Jets are prepared for the former sixth-round pick to move out of their price range when free agency opens next week, Tony Pauline of ProFootballNetwork.com notes. Although the Jets have deployed below-average defenses during Fatukasi’s two seasons as a full- or part-time starter, the UConn product has played well. Having turned 27 last week, Fatukasi should have prime years remaining. The Jets have Quinnen Williams under contract through 2023 and must make a decision on Sheldon Rankins, who will see $1.25MM of his $4.5MM base salary become guaranteed on the fifth day of the 2022 league year (March 20).

Here is the latest out of New York:

When speaking to the media at the NFL Combine, Jets general manager Joe Douglas confirmed a decision many felt was inevitable. The team will pick up the fifth year option on Quinnen Williams‘ contract (video link). 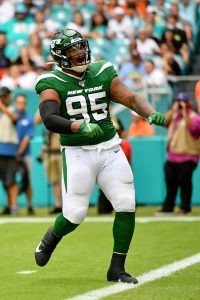 “We are going to pick up pick up Quinnen’s option”, Douglas said. “We had that conversation. I don’t think that’s really huge news… We’re excited to have Quinnen. This is going to be year two in a defense that we feel really accentuates his strengths… We’re looking forward for him to come back and dominate this offseason”.

It was reported late in the 2021 regular season that the Jets weren’t in a hurry to give the 24-year-old an extension when he first became eligible. That left the door open to the team letting him play out the last two years of his rookie deal, which would keep him in New York through at least the 2023 campaign. Franchise tags could extend that by two more years, of course, though a new deal would presumably be in place by then.

The third overall pick in 2019, Williams’ production this past year was closer to his second, most effective one than his rookie campaign. In 15 games, he compiled 53 tackles, including seven for a loss, along with six sacks and three pass deflections. Over the past two seasons, his 13 total sacks rank second in the league amongst interior linemen, demonstrating the disruptive presence he was touted to be coming out of college.

With Williams in place for at least another two years, the Jets can move forward this offseason looking to build around him in an attempt to upgrade the league’s worst statistical defense from last season.

When the 2021 season concludes, Jets defensive tackle Quinnen Williams will have three years of service time under his belt, thereby making him eligible for an extension. Despite how good Williams has been, Rich Cimini of ESPN.com expects the team to wait until 2023 to seriously consider a new contract for the budding star.

After all, the Alabama product will earn $10.6MM in 2022, the final year of his rookie contract. The Jets can keep him under club control through 2023 via the fifth-year option to his rookie deal, and at present, that option is worth $10.9MM. That number would jump to $16MM if Williams earns a Pro Bowl nod this year, but even if that happens, a two-year commitment for a total of $26.6MM is quite reasonable for a player of Williams’ caliber.

Plus, the franchise tag value for DTs is usually not too exorbitant, so if New York elects to tag Williams for the 2024 campaign, it will have secured his services from 2022-24 for no more than $45MM. Considering Williams would probably land a $20MM+ AAV contract if he were to hit the open market today, it’s easy to see why the Jets would be willing to wait on a bank-breaking extension, at least until the cap spikes again in 2023.

On the other hand, the club has developed a reputation of not rewarding its best players, so GM Joe Douglas could be tempted to reverse that trend with a player who not only looks like the anchor of the front seven for years to come, but who also is the team’s nominee for the Walter Payton Man of the Year Award. Taking a proactive approach certainly couldn’t hurt team morale and the outside perception of how the front office treats its top performers.

Pro Football Focus pegs Williams as a good defender this year, but not an elite one; his 65.3 overall score positions him as the 43rd-best interior defender out of 126 qualifiers. But this appears to be an instance where the advanced metrics do not quite mesh with the on-field production, as Williams has certainly been as much of a force as most of his top peers this season.

The fact that he excels as a pass rusher will only enhance his value. His 13 sacks over the past two seasons is second only to Aaron Donald‘s 16 among interior linemen.