After Justin Herbert finished the 2021 season in the unusual position of being the AFC’s Pro Bowl starter but out of the playoffs, Brandon Staley voiced concerns about the Chargers‘ roster to ownership. Staley conveyed to both ownership and the Bolts’ front office that defensive and special teams upgrades were necessary this offseason. More specifically, Staley wanted veteran pieces, ESPN.com’s Lindsey Thiry notes, adding that the second-year HC sought a defense capable of complementing a ready-now offense.

“[I] felt really strongly that in order to build a complete football team that was ready to face what we’re going to have to face,” Staley said, “that we needed to make significant changes in those two phases of the game.”

DVOA placed the 2021 Chargers fourth in offense and 26th defensively, despite the fast-rising Staley becoming the team’s head coach based on his defensive credentials. Facing a time crunch created by Herbert’s extension eligibility, the Chargers added big-ticket defensive pieces in Khalil Mack and J.C. Jackson. Auxiliary troops like Sebastian Joseph-Day, Austin Johnson, Kyle Van Noy and Bryce Callahan signed as well. The Chargers also extended Derwin James, on a safety-record deal, this summer. The team, which ranked 28th in special teams DVOA last season, replaced its punter and long snapper as well. JK Scott and ex-Falcon Josh Harris are in those roles this year.

These additions raise the stakes for Staley, who will have fewer excuses given his 2022 personnel. Here is the latest from the AFC West, shifting first to a coach off to an unusual start:

Amidst a slew of changes to the coaching staff, along with the team officially being put up for sale, there will at least be some continuity in the front office for the Broncos. Darren Mougey, the team’s director of player personnel, is being promoted to assistant general manager (Twitter link via NFL Network’s Ian Rapoport).

Mougey is quickly climbing the ladder in Denver. At the age of 36, this promotion puts him yet another step closer to a GM job. New job titles are nothing new to him, though. As Ryan O’Halloran of The Denver Post tweets, this represents the third time in as many years Mougey is moving up the chain of command.

After spending five years as an area scout, Mougey was promoted to assistant director of college scouting in 2020. One year later, he landed the director of player personnel job he held, as it turns out, for just one season. He replaced Matt Russell in the role, after the latter stepped away in the absence of former GM John Elway. Mougey’s rapid ascent to AGM confirms his status in the organization as George Paton‘s right-hand man.

Rapoport adds that Mougey “had interest elsewhere”, which likely necessitated this move. Considering his rise through the organization, and the buzz starting to be generated about him externally, it will be interesting to see how much longer he remains in place.

George Paton has made some notable outside hires this week, bringing in ex-Vikings staffer Kelly Kleine and recent Lions exec Roman Phifer. But the new Broncos GM opted to promote from within to fill a key role.

John Elway‘s successor named Darren Mougey as the franchise’s new director of player personnel, the Broncos announced. Mougey, 36, has been with the franchise since 2012.

This high-ranking position, which frequently serves as the final stepping stone ahead of GM rises, became vacant after longtime Elway right-hand man Matt Russell stepped down after last season. Russell was with the Broncos since 2009.

“Darren is an outstanding evaluator who has an excellent reputation around the league as an up-and-coming personnel executive,” Paton said. “Getting to work with Darren over the last five months, he is a strong communicator and has great leadership qualities. We’re fortunate to have Darren leading our pro and college scouting while also being a sounding board on all roster decisions.”

Despite the Broncos changing GMs, this marks the second straight offseason in which Mougey has received a promotion. Last May, he rose from an area scout role to the Broncos’ assistant director of college scouting. Mougey will now oversee both the Broncos’ college and pro scouting departments and serve as Paton’s second in command.

The Broncos also hired Sae Woon Jo as their western national scout. Jo spent the past nine years with the Falcons, arriving early during Thomas Dimitroff‘s regime. He worked as Atlanta’s college scouting coordinator most recently.

Matt Russell has been with the Broncos since Josh McDaniels‘ run as head coach, and the team rewarded the holdover from the previous regime Friday. 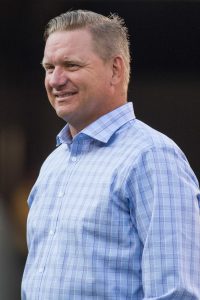 The Broncos promoted Russell to VP of player personnel, the team announced on Friday. This will be Russell’s 12th year with the franchise. Previously the team’s player personnel director for nearly eight years, Russell has overseen the Broncos’ pro and college personnel departments during most of John Elway‘s tenure. Although Elway did not hire him, Denver’s current GM continues to hold Russell in high regard.

The former Patriots and Eagles scout played a key role in the Broncos’ drafts in the late 2010s, ones that produced better returns than the team’s selection hauls immediately preceding them, and before that helped Elway transform Denver’s roster in between Super Bowls XLVIII and 50.

Although Russell has not been mentioned in GM searches, his and Elway’s partnership has given the Broncos rare continuity. Only the Patriots (Bill Belichick–Nick Caserio) and Cowboys (Jerry and Stephen Jones) have seen their top two personnel execs work together this long — among active staffs — according to the Broncos’ website.

Denver also promoted another staffer who arrived during its previous regime. Mark Thewes, who began as assistant to McDaniels in 2009, will now serve as VP of football operations. Thewes was previously the Broncos’ director of team administration. Additionally, the Broncos promoted western regional scout Darren Mougey to assistant director of college scouting.