Ravens quarterback Lamar Jackson is on the team’s injury report for the third straight week after not finishing practice today, according to Jamison Hensley of ESPN. This is not a continuation of any previous injuries and his status for the weekend is still far from determined.

Two weeks ago, Jackson sat out of a practice due to illness and followed that up with a missed practice last week because of a hip injury. The former MVP was sidelined today with a quadriceps issue that caused him to seek treatment from a trainer and miss his usual media session.

Although many have assumed Jackson’s running tendencies would lead to an increase in injuries, he has been remarkably durable. Over five years in the league, Jackson has only missed four games over a four-week stretch last year as he dealt with an ankle injury. His continuous ability to play despite being banged up is an encouraging sign for Baltimore.

The team will want their most valuable player as they prepare to face one of the league’s more stout defenses from Denver this week. If Jackson is unavailable, the Ravens will turn to Tyler Huntley, who went 1-3 as a starter in the four games Jackson had to miss last season.

Here are a few more injury rumors from around the NFL, starting with a couple of bumps and bruises on the Chargers offensive line:

The Bills have agreed to trade defensive end Darryl Johnson to the Panthers (Twitter link via NFL.com’s Ian Rapoport). In exchange, the Panthers will send a 2022 sixth-round draft pick to Buffalo. 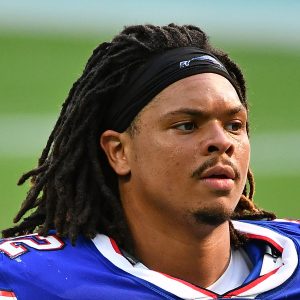 Johnson was facing long odds of making the Bills’ final cut, given their surplus of talent up front. They’re already slated to start Jerry Hughes and Mario Addison at DE with support from A.J. Epenesa and rookies Gregory Rousseau and Carlos Basham.

Now, Johnson will fight for snaps behind Brian Burns and Morgan Fox in Carolina. Still, the 24-year-old figures to spend more time on special teams.

With Johnson in the fold, the Panthers now have 72 players on the roster. They’ll need to trim nearly 20 players between now and tomorrow’s deadline.

5:04pm: In addition to their moves earlier today, the Bills have waived safety Jonathan Meeks, ESPN’s Mike Rodak tweets. The Bills attempted to trade Meeks, per Rodak, but were unable to find any takers. Rodak writes that Meeks is a candidate to end up on the Bills’ practice squad if he goes unclaimed on waivers. According to Fox Sports’ Alex Marvez, the Bills tried – and failed – to trade a receiver in order to keep Meeks on their 53-man roster (Twitter link).

1:07pm: The Bills announced that they have cut 16 players, including defensive end IK Enemkpali, as a part of their effort to get down to a 53-man roster. The full list of transactions is below:

Enemkpali is now (and perhaps, forever) best known as the player who punched Jets quarterback Geno Smith, causing him a broken jaw and many weeks on the sidelines. Immediately after the incident, the Jets waived the linebacker/defensive end and old pal Rex Ryan wasted little time in claiming him. Enemkpali only saw the field sparingly in his rookie season, playing 40 defensive snaps and contributing a little on special teams as well.

Groves, 31, appeared in all 16 regular season games for the Titans last season, including three starts. The linebacker, a former second round pick by the Jaguars, has bounced around a bit over the years and despite signing with Buffalo in August, he’ll be looking for a new NFL home once again in 2015.

Fluellen, 30, spent nearly all of his career with the Lions since being drafted by the team in the third round back in 2008. However, he has never played a significant role in Detroit, acting as a part-time contributor over the course of 77 career games (75 with Detroit). In 2014, Fluellen recorded 10 tackles, two sacks, and a fumble recovery in 183 defensive snaps. In June, he hooked on with Buffalo, but his stay in Western New York was brief.