The Cardinals have released cornerback Breon Borders, per a club announcement. This will enable the Cardinals to activate star defensive lineman J.J. Watt in time for Monday night’s game against the Rams. 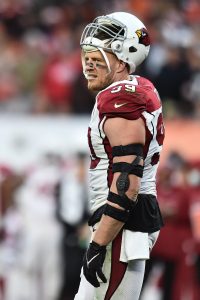 Once again, Watt has beaten his recovery timetable to return for the postseason. The three-time Defensive Player of the Year was once thought to be done for the year, thanks to labrum, bicep, and rotator cuff tears. But, somehow, he’s good to go for tomorrow night as the Cardinals look to improve from 38 points allowed against the Seahawks in Week 18.

There’s no doubt that the Cardinals — 7-0 with Watt in the lineup and 4-6 without him — are a better team with the future Hall of Famer playing opposite of Chandler Jones. And, in his limited sample, Pro Football Focus had Watt rated as a top-10 interior defensive lineman this season.

Watt, 32, registered five tackles for loss and ten QB hits in his seven regular season games this year. More of the same will go a long way towards breaking the Cardinals’ playoff win drought, though, on the other side of the ball, they’ll be without star wide receiver DeAndre Hopkins.

Breon Borders is heading to Arizona. The Cardinals have signed the veteran cornerback off the Titans practice squad, reports Aaron Wilson (via Twitter).

The defensive back spent most of the 2020 and 2021 seasons with the Titans organization. He started five of his six appearances in 2020, finishing with 27 tackles, five passes defended, and one interception.

After getting waived during the offseason, Borders re-signed with Arizona, and he’s spent much of the 2021 campaign bouncing between their active roster and the practice squad. In total, he’s seen time in 11 games this season, collecting five tackles. The 26-year-old played mostly on special teams this year, and he hasn’t played a defensive snap since late October.

Borders will presumably see a similar role in Arizona. Byron Murphy Jr., Robert Alford, Marco Wilson, and Antonio Hamilton seem to have secured their spots atop the depth chart. The organization also has Kevin Peterson and Jace Whittaker stashed on the practice squad.

The Titans are down another skill player. The team announced that they’ve placed wideout A.J. Brown on injured reserve.

Having suffered a chest injury, Brown did not practice all week and had already been ruled out for tomorrow’s showdown against the Patriots. Fortunately, the Titans and Ryan Tannehill should have their top receiver back before the end of the season. Per NFL Network’s Ian Rapoport (on Twitter), the injury isn’t a season-ender and Brown is expected to be back in December. The earliest that Brown could come back is Week 16 against the 49ers, although that TNF game comes on a short week.

The offense the Titans deploy in Week 12 will not look especially similar to the one it hopes to trot out come January. Tennessee already has Derrick Henry and Julio Jones on IR. The team also lost fill-in wideout Marcus Johnson for the season last week. Wideout Golden Tate could have been one candidate to fill one of those roster spots, but the veteran wasn’t elevated for tomorrow’s contest.

Temporarily, Tannehill will be throwing to the likes of Nick Westbrook-Ikhine and Chester Rogers. The team also has a fully stocked tight ends depth chart with Geoff Swaim, Anthony Firkser, and MyCole Pruitt.