Collins began his latest Patriots stint by signing with their practice squad Oct. 3, but the veteran linebacker has only played in one game this season. That also came on a Monday night — against the Bears in October. Monday will be Collins’ 87th game as a Patriot. Stints with the Browns and Lions interrupted this run, but the 2013 second-round pick has re-signed with the Patriots three times.

Marcus Mariota‘s IR move created a need for a new Falcons backup. Woodside, who was with Arthur Smith in Tennessee, will step in behind new starter Desmond Ridder this week. Ridder and Woodside are the only two QBs on Atlanta’s active roster or practice squad presently. Harris sustained a torn pectoral muscle Thursday night and will require surgery. A former fourth-round pick, Harris has bounced on and off the Rams’ active roster this season. He be retained via exclusive rights free agent tender next year.

New Orleans is adding another post-draft veteran. The team agreed to terms on a one-year deal with offensive lineman Josh Andrews on Monday, according to his agent (on Twitter). 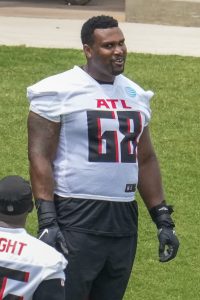 Although Andrews has only made four starts throughout his career, he has been in the NFL since 2014. The former Eagles UDFA spent last season with the Falcons.

Andrews spent four years with the Eagles, collecting a Super Bowl ring for his backup role on Philadelphia’s 2017 squad, and landed with the Vikings in 2018. While the Oregon State product returned to Philadelphia in 2018, he finished that season with the Colts, who kept him around through the 2019 campaign as well. Andrews started four games with the Jets in 2020 and played in two games as a Falcon last year, having signed with Atlanta for the veteran minimum. It would surprise if this deal was worth more than that low-seven-figure amount.

The 30-year-old blocker will join other vets vying for backup jobs on the Saints’ O-line. James Hurst and Forrest Lamp also reside as backup options for a Saints O-line that returns four starters from last season and has first-round pick Trevor Penning with a clear avenue toward the starting left tackle gig.

The Falcons will make an adjustment to their preferred starting lineup come Week 1. The team had planned to use Josh Andrews as one of its starting guards, but a recent injury will force the team to change course.

Andrews suffered a broken hand during practice Tuesday, and Tom Pelissero of NFL.com tweets the Falcons will place him on IR to start the season. While this surgery is not expected to sideline Andrews too long, he must sit until at least Week 4.

Atlanta added Andrews in late March, signing the former Eagles, Colts and Jets blocker to a one-year deal worth the veteran minimum. Andrews and Chris Lindstrom were expected to be the Falcons’ Week 1 guard starters. Andrews, 30, has started just four career games — all coming with the Jets last season.