Kamu Grugier-Hill has found a new home. The linebacker is signing with the Cardinals, according to ESPN’s Adam Schefter (via Twitter). Grugier-Hill asked for and was granted his release by the Texans last week. 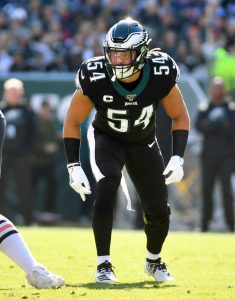 During his lone full season in Houston in 2021, Grugier-Hill collected a career-high 108 tackles, three sacks, and a pair of forced fumbles in 14 games. He also set the Texans’ single-game record for tackles with 19. He collected 40 tackles through Houston’s first six games this year, but he graded out as PFF’s second-worst LB at the time of his release. The Texans were planning to increase rookie third-round pick Christian Harris‘s playing time, and Grugier-Hill decided to seek more playing time elsewhere.

However, it’s remains to be seen if he’ll see a significant role in Arizona. Zaven Collins and Isaiah Simmons soak up many of the linebacker snaps, and the Texans have also Ben Niemann, Tanner Vallejo, Nick Vigil, and Zeke Turner getting looks at the position.

The Cardinals also brought in offensive lineman Rashaad Coward for a workout today, per Aaron Wilson of ProFootballNetwork.com (on Twitter). Coward saw time in 30 games for the Bears through his first three seasons in the NFL, but he was limited to only four appearances with the Steelers in 2021. The 27-year-old spent the preseason with the Cardinals. 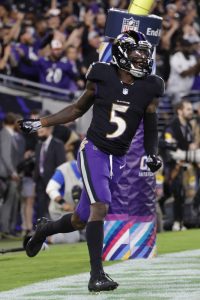 The offseason acquisition injured his hamstring in the middle of July, and he landed on NFI as training camp opened. Coach Kliff Kingsbury told reporters that Brown won’t be a full participant right away. He’ll participate in walk-throughs over the next few days, with the hope that he’ll be able to take part in individual drills by the end of the week and be a full participant next week.

“That’s our timetable,” Kingsbury said (via ESPN’s Josh Weinfuss). “We want him to get the walk-throughs, get those mental reps so he feels comfortable when he’s out there.”

The Cardinals acquired Brown earlier this offseason from the Ravens, teaming him up with his college quarterback, Kyler Murray. With DeAndre Hopkins suspended for the first six games of the 2022 season, Brown will be counted on to lead a receivers room that also includes A.J. Green, Rondale Moore, Andy Isabella, and Antoine Wesley.

Brown’s activation from NFI ultimately cost Blake his job. The wideout spent the first four seasons of his career in Atlanta before joining the Cardinals this offseason. In 41 games (three starts), Blake hauled in 28 receptions for 257 yards. He also collected eight special teams tackles.

Meanwhile, Coward was brought in to provide some depth. D.J. Humphries continues to be sidelined by “a gastrointestinal issue” (per the team website), so Coward will provide the coaching staff with an experienced option. The 27-year-old has started 15 of his 34 career games in stints with the Bears and Steelers.

Today’s minor moves across the NFL: