Barely a half-hour after agreeing to send Bradley Chubb to the Dolphins, the Broncos are acquiring another edge player. They will land Jacob Martin from the Jets, Ian Rapoport of NFL.com tweets. 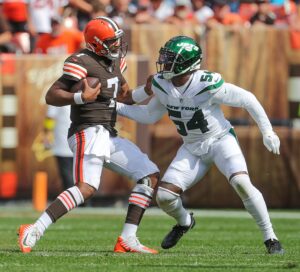 This is a pick-swap agreement, with Rapoport adding the Broncos will send a 2024 fourth-rounder to the Jets in exchange for Martin and a 2024 fifth. This is Martin’s second time being traded; he was part of the Seahawks and Texans’ 2019 Jadeveon Clowney deal.

Martin, 26, is a Denver-area native under contract through 2024. The Jets signed the former Seahawks and Texans edge defender to a three-year, $13.5MM deal this offseason. In eight Jets games as a backup, Martin registered 1.5 sacks and four quarterback hits. Martin’s departure figures to free up more playing time for first-round pick Jermaine Johnson.

A former Seahawks sixth-round pick in 2018, Martin has been a decent backup rusher. He has 15 career sacks and seven forced fumbles. In his lone starter season (2021 in Houston), the Temple alum registered a career-high four sacks and forced four fumbles. Martin will be asked to contribute to a pass rush that has seen injuries and today’s Chubb trade deplete it.

Denver has Randy Gregory on IR with a knee injury and Baron Browning on the mend due to a hip ailment. With Chubb gone, the AFC West team that possessed a training camp edge surplus needed bodies. Nik Bonitto and 2021 seventh-round pick Jonathon Cooper stand as Denver’s top available rushers. Martin, who is owed less than $700K the rest of the way this year, stands to contribute going forward. Martin is tied to $4.25MM and $3.5MM base salaries in 2023 and ’24, respectively.

The Jets feature a deep pass-rushing contingent, with Carl Lawson and John Franklin-Myers operating as the team’s starting D-ends. Chosen 26th overall after the Jets traded back into Round 1, Johnson has yet to play more than 34% of the team’s defensive snaps in a game. Johnson (1.5 sacks) and Vinny Curry reside as Gang Green’s backup edges.

The Jets are signing edge rusher Jacob Martin (Twitter link via NFL.com’s Ian Rapoport). Martin will head to New York a three-year, $13.5MM deal with $6MM guaranteed and the potential to earn even more via incentives. 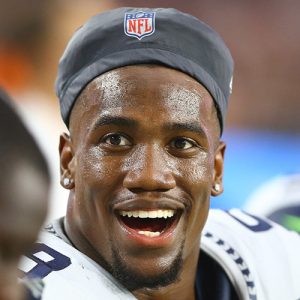 Martin, a sixth-round pick of the Seahawks in 2018, was part of the trade that sent Jadeveon Clowney to Seattle. Over his three years in Houston, Martin quietly turned himself into a key defensive cog. The Texans wanted to keep him, but the Jets ultimately came away with the highest bid.

In 2021, Martin made 14 starts and appeared in 61% of the Texans’ defensive snaps, both of which were new personal watermarks. While he posted only four sacks, Martin’s peripherals suggest that there was consistent pressure with room for continued growth.

Part of his success came from playing as a true 4-3 DE and Jets head coach Robert Saleh will keep him on that same track. Martin might not be as accomplished as other edge rushers they were chasing (like Chandler Jones), but he still offers lots of upside for Gang Green.

Defensive end Jacob Martin, selected by the Seahawks in the sixth round of the 2018 draft, was part of the package received by the Texans in the 2019 trade that sent Jadeveon Clowney to Seattle. Over his three years in Houston, Martin has quietly turned himself into a key component of the club’s defense, and as Aaron Wilson of Pro Football Network writes, the Texans are actively discussing a new contract that would keep Martin off the open market when free agency opens this week.

In 2021, the Temple product started 14 games and appeared in 61% of the Texans’ defensive snaps, both of which represented career bests. While he posted only four sacks, his peripherals suggest that there is room for continued growth. As Wilson writes, Next Gen Stats credited Martin with the third-fastest “get-off” among all defensive players, behind only the Chargers’ Joey Bosa and the Steelers’ Alex Highsmith.

Pro Football Focus handed Martin a solid 67.3 overall score last season, which was also a career-high. The strides he has made are thanks in no small part to the fact that he was able to operate as a true 4-3 DE when Lovie Smith took over as defensive coordinator last year. Prior to that, Martin had worked as an outside linebacker in the Texans’ 3-4 scheme, which included pass coverage duties that he struggled to handle. With Smith having earned a promotion to head coach, the 4-3 alignment will remain.

Neither Martin nor fellow DE Jonathan Greenard are household names at this point, but they provide the rebuilding Texans with a young, talented, and fairly inexpensive foundation to build upon. Indeed, assuming Martin and the Texans are able to come to terms on a multi-year deal, it’s unlikely to include an eight-figure AAV, and Greenard has two seasons left on his rookie contract.

In related news, the Texans recently worked out former Broncos WR DaeSean Hamilton, as Wilson tweets. Hamilton was officially waived last week, and though the 2018 fourth-rounder was unable to carve out a consistent role in Denver, his size and raw talent figure to get him another opportunity somewhere. It’s unclear if that opportunity will come in Houston, as the Texans re-upped Chris Conley after meeting with Hamilton.

Texans LB Jacob Martin To Become Every Down Player?

Linebacker Jacob Martin proved himself as a solid rotational pass-rusher for the Texans this season. Martin is aiming to make an even bigger contribution going forward.  According to Aaron Wilson of the Houston Chronicle, Martin plans to bulk up and put on some weight this offseason in hopes he can play a more expanded role along Houston’s defensive front.

Listed at 6-2, 242 pounds, Martin was ineffective against the run in early down situations. With that said, he’s shown an effective ability as an edge pass-rusher on long third downs. Still, Martin was on the field for just 21 percent of the team’s defensive snaps last season. In that limited sample, Martin managed 11 combined tackles, 7 quarterback hits, 3.5 sacks, one forced fumble, and one fumble recovery.

Houston acquired Martin from the Seahawks earlier this year alongside Barkevious Mingo and a 2020 third-round pick for defensive end Jadeveon Clowney. Many panned Houston’s decision to wait as long as they did to trade Clowney (who had been franchised for the entirety of the offseason). Several defensive linemen like Dee Ford and Frank Clark had been in similar situations to Clowney, but were traded early in the offseason and each recouped greater draft compensation than Houston received for Clowney.

Mingo a former top pick, has yet to be more than a role player in Houston and at his age (29) is unlikely to amount to much more than that. Martin, on the other hand, was selected by the Seahawks in the sixth round out of Temple two years ago and just turned 24 years old in December.

While it still appears the Texans did not extract maximum value for Clowney, if Martin can take another step in his development, Houston could still be satisfied with their return.