The final pick of this year’s second round is under contract. Oklahoma edge rusher Nik Bonitto agreed to terms on his four-year Broncos deal Wednesday, Mike Klis of 9News tweets. 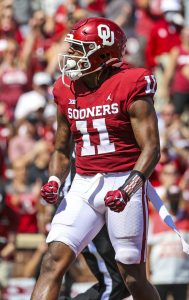 This move comes in advance of the Broncos’ rookie minicamp, which begins Thursday. Bonitto was Denver’s highest draft pick this year, after the team traded its first- and second-round choices as part of the blockbuster Russell Wilson deal. The No. 64 overall selection will attempt to contribute to Denver’s pass rush early.

Denver did not necessarily need an edge rusher early in this draft, having added Randy Gregory to a stable that includes Pro Bowler Bradley Chubb and frequent fill-in starter Malik Reed. But the latter two are entering contract years. Gregory is also rehabbing offseason shoulder surgery. The Broncos, despite being thinner at inside linebacker, are also trying 2021 third-rounder Baron Browning as an edge player this offseason.

One of the quicker edges to enter the draft in recent years, Bonitto combined for 16 sacks between the 2020 and ’21 seasons. The 248-pound linebacker, who clocked a 4.54-second 40-yard dash time at the Combine, also finished with 26.5 tackles for loss between his sophomore and junior years. Coming to the Broncos via the second-round pick obtained in the Von Miller trade, Bonitto represents a lower-cost successor of sorts to the future Hall of Famer.