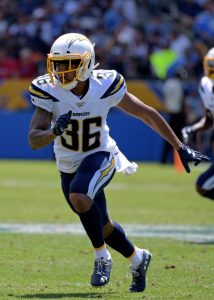 The Colts have waived safety Roderic Teamer, per a club announcement. Teamer joined Indy on a reserve/futures deal back in January, but he was no longer needed after the team used a fifth-round pick to select Florida product Shawn Davis.

Teamer made six starts for the Chargers in 2019 and played on 39% of the Bolts’ defensive snaps. With action on 377 defensive plays, he was one of the season’s most active UDFAs. All in all, he notched one interception, one sack, and made 40 stops as a rookie. Pro Football Focus ranked him just 78th out of 85 full-time safeties, but Teamer still showed potential.

Then, in July, Teamer was hit with a four-game suspension for violating the league’s substance-abuse policy. The Chargers, who figured they were already set at safety, released Teamer later that summer and he spent 2020 out of the league.

Now, the Tulane product will look to sign with his third NFL team.