Baker Mayfield and Jarvis Landry did not practice this week, but both will be in line to play on Christmas Day. The Browns are activating Mayfield and Landry from the reserve/COVID-19 list.

Mayfield tested positive for the coronavirus Dec. 15 but could not navigate the return protocol until Friday. Still, he will be expected to start against the Packers.

The Browns also activated backup Case Keenum, cornerback A.J. Green and defensive lineman Ifeadi Odengibo from the virus list for their Green Bay trip. Cleveland’s loss against Las Vegas, in a game Nick Mullens started with a host of backups at other spots, significantly diminished its playoff chances. The team was without 10 starters against the Raiders.

Some Browns remain on the virus list, including center J.C. Tretter and left tackle Jedrick Wills. Still, the Browns will be in better shape to face the Packers compared to the squad they were forced to deploy Monday.

Mayfield is still dealing with the left shoulder fracture he suffered earlier this season. The former No. 1 overall pick has dealt with other injury issues this season, but the shoulder problem will require surgery in 2022. Some of Mayfield’s numbers are well off his 2020 pace. He has thrown just 13 touchdown passes. While his completion percentage (62.8) is identical to his full-season 2020 mark and yards-per-attempt figure (7.6) up from last year, QBR slots Mayfield 25th. The metric placed the Browns starter 10th in 2020, putting him on track for a potential extension this year. Those talks have since been tabled, with a new deal unlikely until next year at least.

January 3, 8:02am: Browns CB Kevin Johnson was placed on the reserve/COVID-19 list last night, as Nate Ulrich of the Akron Beacon Journal writes. He was supposed to start this afternoon’s critical matchup with Pittsburgh in place of Denzel Ward, who is also on the list. Instead, the club will rely on a combination of Terrance Mitchell, Tavierre Thomas, M.J. Stewart, and Robert Jackson.

Cleveland also elevated UDFA rookie A.J. Green from the practice squad, who may start opposite Mitchell. Green has played one defensive snap this season.

January 2, 1:47pm: The Browns will be without both offensive line coaches Sunday. The team announced Bill Callahan and assistant O-line coach Scott Peters will not coach against the Steelers. Assistant Ryan Cordell will oversee Cleveland’s offensive front during the team’s win-and-in Week 17 assignment. Cordell spent five years with the 49ers, working as both a front office and coaching assistant, and is in his second season as a Browns football research analyst.

While the Browns will be down three coaches, they announced their latest round of contact tracing did not result in more players being identified as high-risk close contacts, Ulrich tweets.

January 2, 9:06am: There’s been another positive COVID-19 test on the Browns’ coaching staff, but as of right now, it doesn’t sound like it will impact Sunday’s game against the Steelers. NFL Network’s Mike Garafolo reports that the Browns had a positive test and have closed their facility (via Twitter). Josina Anderson tweets that the Browns will not practice this morning. 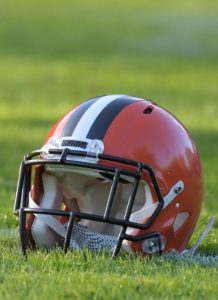 The Browns released a statement confirming the news (via Twitter):

“The Cleveland Browns were informed this morning that a member of their coaching staff has tested positive for COVID-19. The team will continue virtual meetings as the facility is currently closed while contact tracing is conducted. We will consult with league medical professionals on the appropriate next steps.”

Browns wide receivers coach Chad O’Shea had already been declared unavailable for tomorrow’s game after testing positive earlier this week. Despite the second positive test result, a source told Nate Ulrich of the Beacon Journal that there’s been no change to that status of tomorrow’s game (Twitter link).

This is obviously poor timing for Cleveland, as the Browns are on the verge of clinching their first playoff spot since the 2002 season. A win against Pittsburgh will secure that postseason appearance, but there are plenty of scenarios where Cleveland could make the playoffs with a loss tomorrow.

With O’Shea testing positive earlier this week, the Browns were forced to close their facilities. The team finally got their first full team practice in yesterday, and everyone understands the significance of preparing for tomorrow’s game.

“We have to be ready,” Browns wideout Jarvis Landry told Ulrich. “We have to win this game. There’s no secret about it.”