The Dolphins saw a number of key players go down with injuries during today’s loss to the Vikings. Among them was cornerback Nik Needham, who suffered a torn Achilles (Twitter link via NFL Network’s Ian Rapoport). His season is over as a result. 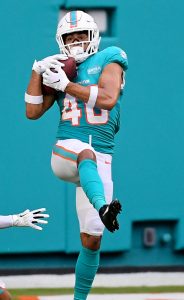 The news marks a significant blow on a number of fronts. The 25-year-old had been operating as a full-time starter on the perimeter this season, which represented an uptick in playing time compared to the past two seasons. He failed to register an interception in 2022, and totaled just a pair of pass deflections. He did, however, post a mark of 47% completion percentage allowed, a career-best figure in that regard.

Needham was given a second-round RFA tender this offseason; he and the Dolphins did not agree on a long-term deal afterwards. As a result, the former UDFA was on the books for $3.9MM on the one-year pact. This injury will certainly affect his free agent stock heading into the spring, but also the Dolphins’ secondary in the immediate future.

Part of the cause for Needham’s heavy workload was the ongoing absence of fellow corner Byron Jones. The veteran has been recovering from an Achilles tear of his own, but that process has not gone according to plan. With Jones still not having been designated to return from IR, the loss of Needham will be felt significantly for the Dolphins. Compounding the situation even further, Keion Crossen was ruled out midway through today’s game as well, leaving the team Dolphins notably thin at the position opposite Xavien Howard.

In other injury news from Sunday, third-string quarterback Skylar Thompson exited the game with a thumb injury. That required backup Teddy Bridgewater to enter the contest, after he cleared concussion protocol. The same is true of starter Tua Tagovailoa, who is expected to return to action next week.

Keion Crossen is heading back to the AFC East. After starting his professional career with the Patriots, the special teams ace is signing with the Dolphins, reports Aaron Wilson of ProFootballNetwork.com (via Twitter). 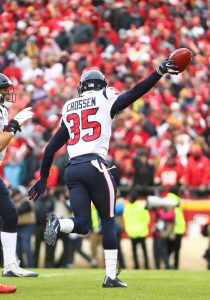 Crossen got a three-year deal worth $10.5MM. The player negotiated the contract himself, per Wilson. The deal contains more than $3MM in guaranteed money, with only the first season of the deal fully guaranteed (Twitter link).

Following his rookie season in New England, Crossen spent two seasons with the Texans, including a 2020 campaign where he compiled a career-high 46 tackles while appearing in a career-high 28 percent of his team’s defensive snaps.

Crossen was traded to the Giants last August for a sixth-round pick. He ended up getting into 16 games for his new team, compiling 13 tackles while primarily appearing on special teams.

A trade! On a day where a bunch of bottom of the roster guys are getting let go as NFL teams trim their rosters to 85 players, the Texans and Giants made time to work out a deal.

Houston is sending cornerback Keion Crossen to New York, a source told Doug Kyed of Pro Football Focus (Twitter link). In exchange the Giants will send back a 2023 sixth-round pick, Mike Garafolo of NFL Network tweets. Crossen originally entered the league as a seventh-round pick of the Patriots in 2018. He won Super Bowl LIII with the team, but was traded to the Texans the following August.

Although he’s a cornerback and actually started four games on defense for Houston this past year, he’s mostly known as a special teams standout. As many were quick to point out, Giants head coach Joe Judge was Crossen’s special teams coordinator his rookie season in New England.

His first two years as a pro he was almost exclusively a special teams guy, but last season he was pressed into some action for an undermanned Houston defense and finished with 46 tackles and five passes defended.

Another trade for the Texans. They will acquire 2018 seventh-round pick Keion Crossen from the Patriots in exchange for a sixth-round choice, Ian Rapoport of NFL.com reports (on Twitter).

This marks the third trade of the day for Houston, which sent Jadeveon Clowney to Seattle and landed Carlos Hyde from Kansas City. Crossen was likely on his way off New England’s roster, with the Pats boasting one of the NFL’s top cornerback depth charts.