Dameon Pierce‘s season has come to an end. The Texans have placed the rookie running back on injured reserve, reports ESPN’s Field Yates (via Twitter). 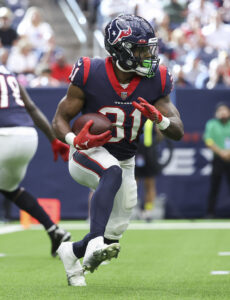 Pierce suffered a high ankle sprain during Houston’s Week 14 loss to the Cowboys, although initial reports indicated that the injury was mild. It was believed that the rookie RB may only have to miss a game or two, which wouldn’t necessitate a move to IR. Instead, the Texans decided to shut down Pierce for the year.

The fourth-round rookie has quickly established himself as an offensive focal point in Houston. He’s started all 13 games for the Texans, and he leads all rookies with 939 rushing yards. In total, the Florida product has contributed 1,104 yards from scrimmage and five touchdowns. With Pierce out for the final four games, the Texans will likely turn to Rex Burkhead and Dare Ogunbowale to lead their RB room. Royce Freeman will also be signed to the active roster, according to Aaron Wilson of ProFootballNetwork.com (on Twitter).

Cornerback Derek Stingley Jr. and defensive tackle Taylor Stallworth are also heading to IR, per Yates. Stingley, the third-overall pick in this year’s draft, hasn’t played since Week 10 while recovering from a hamstring injury. He started each of his nine appearances for the Texans this season, collecting 43 tackles and one interception. After starting the season in Kansas City, Stallworth got into one game for Houston in 2022.

There is some good news on the injury front. According to Wilson (on Twitter), the Texans have also activated defensive lineman Jon Greenard from IR. Greenard had eight sacks in 12 starts last season, and he started each of Houston’s first four games this year before landing on IR. To round out their moves, the Texans signed defensive back Jacobi Francis to the 53-man roster and have promoted defensive back Will Redmond and tight end Mason Schreck from the practice squad.

Ellefson came off IR just last week and did not play in the Vikings’ matchup against the Jets. A nagging groin injury will send the third-year tight end back to IR. Although the new IR rules allow for players to be activated twice from IR, Minnesota’s injury-return math may come into play by the time Ellefson’s second activation window opens (Week 18).

In Darden, Browns snagged the NFL’s punt-return yards leader. The 2021 Bucs fourth-rounder has not seen much action on offense, with Tampa Bay oozing experience at the receiver position. But he has been Tampa Bay’s primary punt returner. Darden has totaled 330 punt-return yards this season. A 2021 third-round pick, Schwartz sustained a concussion that has sent him to IR. Ragland has spent the past month on the Raiders’ taxi squad. The Browns are the former second-round pick’s fifth team in four seasons; the ex-Jets draftee was with the Chiefs, Lions and Giants from 2019-21. After losing Anthony Walker and Jacob Phillips earlier this year, the Browns moved Sione Takitaki to IR with an ACL tear this week.

A rotational cog for the Saints, Colts and Chiefs during his five-year career, Stallworth played only 14% of Kansas City’s defensive snaps this season. He committed a third-down roughing-the-passer penalty during a Bengals touchdown drive in Week 13. The Texans had already used one of their injury activations on Dwumfour; the 1-10-1 team has three remaining. Greenard, who led the 2021 Texans with eight sacks, has been on the shelf since going down with a calf injury in an October practice.

The Texans will be without one of their top pass rushers for the next month-plus. ESPN’s Adam Schefter reports (via Twitter) that Houston is placing defensive end Jonathan Greenard on the injured reserve.

The defensive end injured his calf this week during practice. The injury is expected to sideline Greenard for four to six weeks. The pass rusher missed Week 5 with an ankle injury but was expected to be back on the field after Houston’s bye week. Instead, while preparing for Week 7, Greenard suffered an injury that will keep him off the field for at least the next four games.

The 2020 third-round pick made a name for himself in 2021. In 12 starts for Houston, Greenard finished with 33 tackles, eight sacks, and a pair of forced fumbles. Through four games this season, he collected 1.5 sacks and five tackles for loss, with Pro Football Focus ranking him 78th among 116 qualifying edge rushers. The 25-year-old graded out much better in the past, ranking 11th in 2021.

When Greenard was out of the lineup in Week 5, Mario Addison made his season debut and ended up playing 64 percent of his team’s defensive snaps. Rasheem Green has also seen his role grow, culminating in him seeing a season-high in defensive snaps in Week 5. The duo will likely fill in for Greenard at defensive end opposite Jerry Hughes, with Demone Harris and Ogbonnia Okoronkwo also there to soak up some snaps. 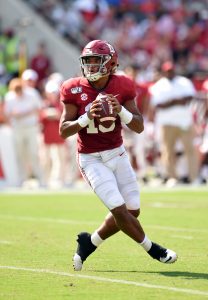