Clyde Edwards-Helaire will make his NFL debut Thursday night, doing so without the benefit of preseason carries. The Chiefs brought back both Darrel Williams and Darwin Thompson to serve as his backups, but the defending Super Bowl champions considered a somewhat higher-profile RB2 option. A year after the Chiefs scooped up LeSean McCoy following his Bills release, they had interest in Adrian Peterson, Jeremy Fowler of ESPN.com tweets. Peterson, who played under Eric Bieniemy from 2007-10 when the current Chiefs OC was the Vikings’ running backs coach, was interested in a Chiefs deal as well, per Herbie Teope of the Kansas City Star (on Twitter). COVID-19 testing and the team’s first game being on Thursday night nixed a potential partnership, Fowler adds. Peterson signed with the Lions on Sunday.

Ahead of the Chiefs kicking off the 2020 season in less than an hour, here is the latest from the AFC West: 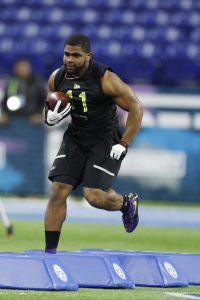