Giants offensive lineman Andrew Thomas still hasn’t fully recovered from his offseason ankle injury. During an appearance on the Giants Huddle podcast, Thomas admitted that he’s still not 100 percent but intends to be on the field for the start of training camp. 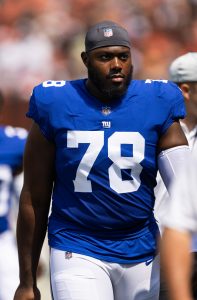 “Rehab is coming along pretty well. I’m doing everything the trainers ask me to do,” Thomas said (via Matt Citak of the team’s website). “Definitely moving a lot better and I’m prepared to be ready for training camp.

“It’s definitely frustrating, but it’s part of the business, learning how to navigate being injured because you’re never going to feel 100 percent. But I felt like last year I started to make some strides. It’s a little frustrating sometimes when you can’t be on the field with your teammates.”

While Thomas didn’t miss any time during his rookie year, he dealt with an ankle injury throughout the campaign. The nagging injury ended up carrying into the 2021 season and ultimately cost the lineman four games due to a stint on the injured reserve.

The fourth-overall pick in the 2020 draft, Thomas disappointed a bit during his rookie campaign, allowing 10 sacks in 16 games. He reduced that number to only two sacks allowed while starting each of his 13 appearances in 2021. Thomas ranked 19th on Pro Football Focus’ list of 83 qualifying offensive tackles last year, and he earned particularly high scores for his pass-blocking ability.

The Giants did some work on their offensive line this offseason. They brought in veterans Mark Glowinski and Jon Feliciano, and they later added tackle Evan Neal with the seventh-overall pick. That trio will likely start alongside Thomas, who is expected to slide in at left tackle.

Duggan notes that it’s the same ankle that was injured in his rookie season, which is a worrying sign. Still, all parties involved hope that this second procedure will put an end to the problem. The 23-year-old landed on injured reserve in October as a result of the nagging ailment. He ended up missing four games, after playing the full 16 games of his rookie campaign, including 15 starts.

The fourth overall pick out of Georgia in 2020, Thomas didn’t perform at a level on par with such a high draft slot or his pedigree coming out of college. However, he showed a great deal of improvement in year two, allowing only two sacks in pass protection; that led to an impressive PFF grade of 82.8. His absence, when injured, was felt for a Giants offensive line that has struggled to find consistency in recent years.

Duggan notes that Thomas is expected to have fully recovered in time for the Giants’ offseason program. However, he adds that the team “will likely exercise caution” given both his injury history and overall importance to the franchise.

Daniel Jones will have his left tackle back in the lineup tonight. The Giants announced that they’ve activated Andrew Thomas from injured reserve.

Thomas suffered an ankle injury back in October that landed him on injured reserve for several weeks. The former fourth-overall pick had previously missed a game this season due to a foot injury, so the Giants decided to be cautious with their young lineman. The lineman discussed juggling a pair of injuries when he spoke with reporters earlier this week.

“Just managing both, trying to do what I can,” Thomas said (via Michael Eisen of the team’s website). “It depends on the day and how they feel, so just doing what I can to make sure I’m ready to play.

“It’s not easy, but it puts a lot of emphasis on my technique. Plays that I might not be able to make athletically, if I have the right technique, I’ll be in the right position, so that’s what I’m trying to do.”

Thomas started 15 of his 16 games during his rookie campaign. He started each of his five appearances in 2021, and he appeared in 100 percent of his team’s offensive snaps through the first four weeks. Matt Peart slid in as the starter while Thomas was out of the lineup.

The Giants’ left tackle is out for at least the next three weeks. New York placed offensive lineman Andrew Thomas on injured reserve today, reports ESPN’s Field Yates (via Twitter).

Thomas suffered an ankle injury during Sunday’s loss to the Rams, but ESPN’s Jordan Raanan notes that the lineman isn’t believed to have suffered a high ankle sprain. While Thomas was lucky to avoid that significant injury, the Giants are still being cautious with the second-year pro, especially after he missed Week 5 with a foot injury.

The left tackle was the fourth-overall pick in the 2020 draft, and he started 15 of his 16 games in 2020. He’s started each of his five appearances in 2021, and he appeared in 100 percent of his team’s offensive snaps through the first four weeks. He was limited to only 29 snaps this past weekend before exiting due to his injury.

The Giants have already scrambling to fill spots on their offensive line, as center Nick Gates and guard Shane Lemieux have already been ruled out for the season. Per Raanan, Matt Peart is expected to fill in for Thomas.

There was a scary injury in the Giants game Sunday, as New York receiver C.J. Board went down with a neck injury that required him to be immobilized and carted off the field. Fortunately, it looks like the worst case scenario was avoided. The team announced that Board had been diagnosed with a neck sprain and concussion after being taken to a local hospital. Giants coach Joe Judge said after the game that the initial feedback he had gotten from doctors was “pretty positive.”

He also said Board was responsive and has movement in his extremities. A 2017 UDFA, Board is in his first season with the Giants. The Chattanooga product has seven catches for 66 yards on the year. Here’s to hoping he makes a swift and full recovery.

Now for more from the struggling NFC East:

The Giants have finalized an agreement with first-round pick Andrew Thomas on his rookie contract, Ralph Vacchiano of SNY tweets. Thomas will receive a fully guaranteed $32.4MM, and the fifth-year option included in his deal would tether him to the Giants through 2024.

Of the several high-end tackle prospects this year, Thomas went off the board first. The Giants using the No. 4 overall pick on a tackle, despite deploying the No. 31-ranked DVOA pass defense last season, illustrates their need for a long-term piece at this position. New York has struggled to fill its tackle spots for several years.

Thomas declared for the draft after his junior season at Georgia. He started for the Bulldogs as a true freshman, protecting fellow 2020 draftee Jake Fromm for the past three seasons. Thomas is expected to start his career at right tackle, replacing Mike Remmers, before being projected to move over to the left side after Nate Solder‘s Giants tenure ends — likely after the 2020 season.