Bears offensive coordinator Luke Getsy has recruited another player to Chicago. The Bears are signing wideout Equanimeous St. Brown, according to Jeff Howe of The Athletic (on Twitter). Brown agreed to join the Bears on a one-year deal, Howe tweets. 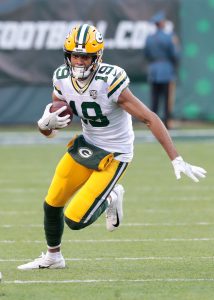 The 2018 sixth-round pick had spent his entire career in Green Bay, with Getsy serving as QBs coach during three of those four seasons. The receiver missed the entire 2019 season, but he otherwise appeared in at least 12 games during his three healthy seasons with the Packers. However, St. Brown hasn’t been able to match his rookie numbers (333 yards from scrimmage) in 2020 nor 2021.

This past season, St. Brown saw time in 13 games (two starts), collecting 112 yards from scrimmage on 12 touches. He also appeared in 34% of the Packers’ special teams snaps.

The Packers made some notable additions at wide receiver this offseason, and a second notable holdover did not make the cut. Green Bay will waive Equanimeous St. Brown, per Tom Pelissero of NFL.com (on Twitter).

A 2018 sixth-round pick, St. Brown has battled injuries as a pro but served as one of Aaron Rodgers‘ auxiliary options at points during the 2018 and ’20 seasons. This move follows the Pack’s decision to reach an injury settlement with Devin Funchess, removing him from the team’s 2021 equation.

Green Bay used a third-round pick on Amari Rodgers and then, at Rodgers’ request, reacquired Randall Cobb via trade. These two will work with Davante Adams, Marquez Valdes-Scantling and Allen Lazard on a suddenly deep Packers receiving corps.

St. Brown missed all of the 2019 season due to injury but returned to play in 12 games last year. For his career, production has been largely elusive. The Notre Dame product and elder of the NFL’s two St. Browns has just 28 receptions for 445 yards and a touchdown as a pro.