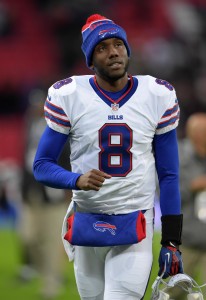 Johnson, who turned 30 on Sunday, was on and off of the Colts’ roster early in 2015 while Andrew Luck was sidelined. In October, Johnson signed on with the Bills to help provide some insurance behind Tyrod Taylor and E.J. Manuel. Johnson did not see the field in Buffalo, however. In his six NFL seasons, Johnson has started only five games. It remains to be seen whether he’ll be on the roster in Baltimore by September, but he can certainly provide another arm in practice while Joe Flacco recovers from a torn ACL.

Ducasse spent the first four seasons of his career with the Jets before joining the Vikings in 2014 and signing on with the Bears in 2015. Selected out of UMass in the second round of the 2010 draft, Ducasse never lived up to his draft pedigree, starting just five games during his time with New York. He topped that number in ’14 alone, starting six contests in Minnesota while playing at both guard positions. In 2015, he appeared in 15 games and started 11 of those contests.

In 2014, Ducasse played in 13 games, totaling 417 snaps, but graded as the league’s No. 61 guard among 78 qualifiers per Pro Football Focus. Last year, PFF rated Ducasse as the 47th best guard in the NFL out of 81 qualified players.

The Ravens also announced that they have signed rookie free agent Sam Brown, a defensive back from Missouri Western State.