Many players have engaged in protests during the national anthem, but Colin Kaepernick‘s unemployment still looms large over the NFL. At this point, it’s hard to see Kaepernick getting an NFL opportunity this year, but teams could be more receptive to signing him next offseason.

The Vikings worked out free agent running back Jonas Gray today, reports Ben Goessling of ESPN.com. Gray has been on the open market since being waived off injured reserve by the Jaguars in late August. 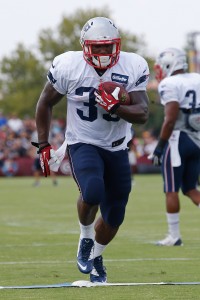 Minnesota should seeing another running back return to the field on Sunday, as Jerick McKinnon participated in practice today and confirmed to reporters, including Matt Vensel of the Minneapolis Star Tribune (Twitter link), that he expects to play against the Lions this weekend. With McKinnon sidelined in Week 8, Matt Asiata managed 42 yards on 14 carries, while Ronnie Hillman — seeing significant snaps for the first time all year — posted four rushes for 15 yards.

Gray’s audition with the Vikings was his third known workout this year, as he’s also met with the Lions and Dolphins.

The Jaguars have waived-injured running back Jonas Gray and claimed defensive tackle T.J. Barnes off waivers from the Bills, Ryan O’Halloran of the Florida Times-Union was among those to report (Twitter link).

Gray has been dealing with a quad issue since Aug. 4, tweets O’Halloran. The Jags signed the 26-year-old off the Dolphins’ practice squad last December, and he went on to appear in two of Jacksonville’s games and log 14 carries for 54 yards. Prior to that, the former Notre Dame back amassed 31 rushes for 122 yards in six games with Miami.

Gray is most known for his brief tenure in New England, which featured a 201-yard, four-touchdown rushing performance against the Colts in November 2014. That showing represented a significant portion of Gray’s production as a rookie. All told, he amassed 89 carries (37 in the Indy game) for 412 yards and five scores in eight contests. With a mere 10 carries in the Pats’ final four games, including their run to a Super Bowl title, Gray fizzled out down the stretch and ended up receiving his release.

This will be the second stint in Jacksonville for Barnes, who signed with the club as an undrafted free agent agent from Georgia Tech in 2013. His time with the Jags lasted just four months, however, as they cut him in the preseason. Barnes spent the past three seasons as a member of the Jets and Bills, with whom he combined for 16 appearances (one start) and eight tackles.

1:03pm: The Jaguars have officially signed Gray, cutting wide receiver Rashad Lawrence to create an opening for the running back, per a team release.

9:21am: Former Patriots running back Jonas Gray is moving from one Florida team’s roster to another, as the Jaguars are signing Gray from off the Dolphins’ practice squad, agent Sean Stellato tells Adam Schefter of ESPN.com (Twitter link).

Gray, 25, was on Miami’s active roster for several games earlier this season, earning 31 carries for 122 yards, along with six receptions for another 72 yards. The Notre Dame product emerged as a potential starter for the Pats last season during his 201-yard, four-touchdown performance against the Colts, but was leapfrogged on the club’s depth chart by LeGarrette Blount and others down the stretch, ultimately leading to his release.

For the Jaguars, Gray provides some insurance in the backfield as starter T.J. Yeldon deals with a knee injury. If Yeldon is unable to play, Denard Robinson figures to see the bulk of the carries for Jacksonville, and Joe Banyard may be in the mix as well, but Gray could get some touches down the stretch.

In what has seemingly become a weekly occurrence in 2015, the Dolphins have signed Jonas Gray to their practice squad, as agent Sean Stellato tells Mike Garafolo of FOX Sports (on Twitter). Gray was released by Miami on Tuesday to make room for center Sam Brenner.

[RELATED: Click here for the rest of Wednesday’s practice squad moves from around the league.]

Gray was subject to waivers after being cut by the Dolphins and some speculated that he could have been a fit for his old team, the Patriots. However, it appears that the Pats declined an opportunity for a reunion, even though Dion Lewis is done for the season with a torn ACL.

Gray, 25, wasn’t a huge part of Miami’s ground attack this season, but earned 31 carries for 122 yards, along with six receptions for another 72 yards. With rookie Jay Ajayi coming off IR-DTR in Week 9 and looking good, Gray no longer had a real place on the Dolphins’ 53-man roster, making him expendable.

Gray emerged as a potential starter during his 201-yard, four-touchdown performance against the Colts during the 2014 season, but was leapfrogged on the Pats depth chart by LeGarrette Blount and others down the stretch. He has yet to make a major mark in 2015.