Ben Jacobs played on the past five Panthers teams, but the franchise will go in another direction. The Panthers plan to release the veteran linebacker, according to Field Yates of ESPN.com (on Twitter). 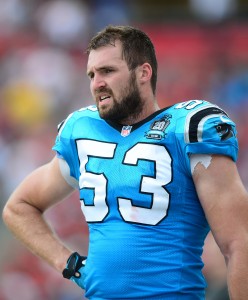 The Panthers signed Jacobs to a two-year deal in 2017. He played out that contract and was set for free agency in March. But this move will give the longtime special-teamer a chance to sign with a team in advance of the higher-profile signing period.

A former UDFA out of Fresno State, Jacobs caught on with the Panthers in 2013 and spent time on their practice squad before rising to the active roster. He has played in 16 games in four of the past five seasons, suiting up for six playoff contests as well.

Carolina will be moving on from Thomas Davis as well, per Davis, so the team may need to address its linebacker depth this offseason. However, the team did draft Jermaine Carter and Andre Smith on Day 3 of the 2018 draft. That helps explain allowing Jacobs to seek opportunities elsewhere.

If Jacobs opts against catching on with another team, or is unable to do so, the Panthers may be eyeing him for a coaching role, Joe Person of The Athletic tweets.

The Panthers announced that they’ve re-signed linebacker Ben Jacobs, agreeing to a two-year deal that will keep Jacobs in Carolina through the 2018 campaign. Jacobs was set to become a restricted free agent this offseason.

Jacobs, 28, played in only three games for the Panthers last season, as he’d been released with an injury settlement before the 2016 season got underway. Re-signed in December, Jacobs went on to see 78 snaps on special teams, an area where’s he contributed in prior seasons. A former undrafted free agent out of Fresno State, Jacobs has never started an NFL contest, but played in all 32 possible games with Carolina from 2014-15, seeing action on nearly three-quarters of the Panthers ST snaps during that period.

Given that he was scheduled to become a restricted free agent, Jacobs likely could have been retained through the tender system at a cost of less than $2MM.