Demaryius Thomas‘s tenure with the Texans has come to an end, as the team announced it has released the veteran wideout. James Palmer of the NFL Network first reported (via Twitter) that the release was forthcoming, and ESPN NFL Insider Field Yates tweets that Thomas was released with a failed physical designation. 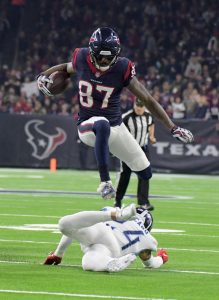 After spending eight-plus seasons with the Broncos, the 31-year-old was traded to the Texans (along with a seventh-rounder) for a fourth-rounder and seventh-rounder back in October. Thomas proceeded to play in seven games for Houston, hauling in 23 receptions for 275 yards and two touchdowns. However, he tore his Achilles in late December, ending his season.

As Palmer notes, the release isn’t an indication that the Texans think Thomas is done. The wideout tore his Achilles during the 2011 offseason, but he was fully healthy after only six months. It will naturally take the veteran a bit more time to recover this time around, but it doesn’t sound like this is the end of the road for the receiver (though Yates observes that Thomas does have a long recovery ahead of him).

Thomas was due $14MM next season, but thanks to an “out” in his contract, the Texans won’t be left with any dead cap. The team could theoretically look to re-sign Thomas at a smaller cap number, although the team is already pretty deep at the position. As of right now, the Texans will roll into next season with DeAndre Hopkins, Keke Coutee, and Will Fuller (who’s recovering from an ACL injury) atop their depth chart.