Former Pro Bowl wideout Demaryius Thomas has passed away, according to Miles Garrett of Fox 5 Sports in Atlanta (on Twitter). Mike Klis of 9News in Denver has confirmed the sad news. Thomas would have turned 34 later this month. 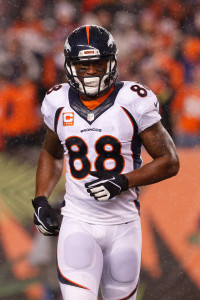 Thomas was a first-round pick by the Broncos back in 2010, and he proceeded to spend eight-plus seasons with the Broncos. The wideout really broke out in 2012 when Peyton Manning took over under center, and Thomas finished with at least 1,000 receiving yards for five-straight seasons. The wideout earned five consecutive Pro Bowl nods between 2012 and 2016, and he was a second-team All-Pro in 2013 and 2014.

The receiver was also a major part of the Broncos’ Super Bowl run in 2015. The wideout finished the regular season with 105 receptions for 1,304 yards and six touchdowns, and he added another seven receptions in three postseason games.

Thomas ranks second in Broncos history in receiving yards (9,055) and receiving touchdowns (60), and he ranks third in receptions (665). He also owns the franchise records in playoff receptions (53).

Following his stint with the Broncos, Thomas spent time with the Texans, Patriots, and Jets. The receiver added another 59 receptions, 708 yards, and three touchdowns to his impressive resume during this time. He announced his retirement from the NFL back in June.

We here at PFR would like to extend our condolences to Thomas’s family, friends, and colleagues.

Although Demaryius Thomas did not play last season, the Pro Bowl wide receiver said during the 2020 offseason he did not intend to retire. The decorated pass catcher has changed his mind a year later.

Thomas announced Monday he will walk away after a 10-year career (video link). The former first-round pick played for the Broncos, Texans, and Jets — with a short stopover with the Patriots — from 2010-19. While the 33-year-old receiver donned four uniforms, he will be remembered primarily for his work in Denver.

Despite coming out of a run-heavy system at Georgia Tech, the 6-foot-3 wideout became one of the NFL’s top receivers in the 2010s. Thomas made four Pro Bowls while with the Broncos and operated as the team’s No. 1 receiver throughout Peyton Manning‘s time in Denver. Thomas reeled off five straight 1,000-yard seasons from 2012-16, and that period doubled as the second-highest peak in Broncos franchise history.

Shortly after trading Brandon Marshall to the Dolphins, the Broncos drafted Thomas in the 2010 first round. Injuries slowed the big-bodied target to start his career, but he did not miss a game for six full seasons after starting the 2011 slate late because of an offseason Achilles tear. Thomas proved essential for Denver’s unorthodox Tim Tebow-directed attack in 2011, and his 80-yard walk-off touchdown — to cap a 204-yard performance — against the Steelers in the wild-card round doubles as one of this era’s signature plays.

Following Manning’s 2012 arrival, Thomas played a centerpiece role for a Broncos team that earned three No. 1 seeds in four years. He teamed with Eric Decker, Wes Welker and Julius Thomas on a talented pass-catching corps in 2013, when the Manning-piloted offense set the NFL single-season scoring record (606 points) en route to Super Bowl XLVIII. Thomas led that team in receiving and caught a career-high 14 touchdown passes. In 2014, he posted a career-most 1,619 yards. This drove the Broncos to give him a five-year, $70MM extension — which occurred within minutes of Dez Bryant‘s identical deal at the 2015 franchise tag deadline. That season, which featured a noticeable Manning decline, Thomas’ 1,304 receiving yards paced the eventual Super Bowl champion Broncos.

Thomas played four seasons on that deal, finishing it out in Houston. The Broncos ended Thomas’ eight-plus-year tenure at the 2018 trade deadline, sending him to the Texans. Later that season, Thomas suffered another Achilles tear — which preceded his release from Houston. Thomas finished his career with former Broncos OC Adam Gase, playing an auxiliary role for the 2019 Jets. Thomas’ 9,055 receiving yards and 60 touchdown receptions rank second in Broncos history — behind only Rod Smith. 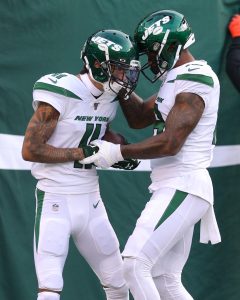 Jets safety Jamal Adams remains a trade candidate, but count linebacker C.J. Mosley as a high-profile member of the defense that wants Adams to stick around.

“[Trading Adams] would be a crazy move,” Mosley said (via Rich Cimini of ESPN.com). “First of all, he’s one of the leaders on the team. … To have that presence in the secondary, a guy that can make plays in the passing game and also plays in the backfield — in the box — that’s always exciting.”

Mosley himself — who played in just two games in his first year with Gang Green after signing a massive free agent contract last offseason — said he feels great and expects to be at full health for training camp (assuming there is a training camp, of course).

Sam Darnold will miss this Sunday’s contest against the Browns after being diagnosed with mononucleosis and the quarterback could miss extended time, as Rich Cimini of ESPN.com relays. The risk of contagion is high with the infection and the Jets have quarantined Darnold so that he would not spread it to any of his teammates.

Trevor Siemian, who signed with the Jets this offseason, will start in Darnold’s place. Siemian is 13-11 as a starter, all of which from his time with the Broncos.

It’s unclear how many games Darnold will miss, though with New York’s bye coming in week 4, it would be surprised if we saw him on the field before then. 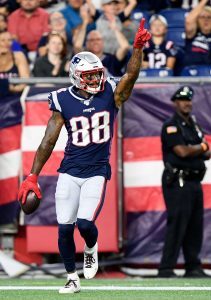 One of a few teams to release a vested veteran over the weekend rather than expose a non-vested player to waivers, the Patriots re-signed Demaryius Thomas in advance of Week 1. The defending Super Bowl champions will give the 10th-year veteran a raise as well.

The Pats increased Thomas’ base salary from $1.2MM to $1.5MM, Field Yates of ESPN.com tweets. While this is minimal compared to what Thomas entered last season earning, the Patriots now have two Pro Bowlers (Thomas and Josh Gordon) and a Super Bowl MVP in their receiving corps.

Thomas entered last season in the fourth year of his five-year, $70MM deal he and the Broncos hammered out at the 2015 franchise tag deadline. The 31-year-old talent may now be a week-to-week proposition, depending on how he looks, health-wise. The Pats have not been shy about cutting veteran wideouts over the past two years, and Thomas’ status may be tenuous if/when N’Keal Harry comes off IR.

The 2010 first-round pick spent much of Patriots camp on the active/PUP list but was activated in time for a seven-catch, 87-yard, two-touchdown showing in the team’s final preseason game. Thomas suffered his severe Achilles injury in Week 16 of last season and said no other teams expressed interest. The four-time Pro Bowler, who posted 677 yards and five touchdown catches in 2018, will have a chance to prove he can still contribute.

Demaryius Thomas didn’t leave New England long enough for the team to even miss him. On Monday morning, the Patriots and Thomas agreed to a new one-year deal, Adam Schefter of ESPN.com tweets.

This was likely the plan all along. The Patriots wanted to place rookie N’Keal Harry on injured reserve while leaving the door open to his return in the second half of the season. That would not have been possible had they placed Harry on IR over the weekend. So, instead, they cut Thomas, placed Harry on IR on Monday, and re-signed Thomas moments later.

Thomas isn’t the player he once was, but he did show glimpses of his old self in preseason. In the Pats’ preseason finale, he caught seven passes for 87 yards and two scores.