The Cowboys have signed guard Jonathan Cooper and cut fellow guard Ryan Seymour in a corresponding move. Clarence Hill of the Star Telegram reported earlier Wednesday that Dallas and Cooper had agreed to terms (Twitter link). 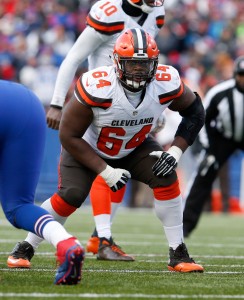 Cooper, who was recently cut loose by the Browns, worked out for the Cowboys this week and made a solid impression on coaches. The former No. 7 overall pick hasn’t come close to living up to expectations, but the advanced stats indicate that he was pretty decent in his short stint with Cleveland.

The Cowboys are still waiting on the return of La’el Collins, but Cooper can help shore things up on the interior line until he gets back. Cooper figures to slot in as a depth piece behind starters Ronald Leary and Zack Martin and reserve Joe Looney.

The Cowboys have a first-round bye before getting started in the divisional round.