The Vikings have claimed running back Mack Brown off waivers, ESPN.com’s Adam Schefter tweets. The Redskins released Brown earlier this week, giving the league’s other 31 teams a chance to poach him. 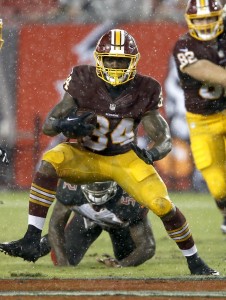 The addition of Brown could serve two purposes for Minnesota. For one, he’ll give them depth behind Latavius Murray and Jerick McKinnon. He could also give the Vikings some valuable recon in advance of their Nov. 12 showdown in D.C.

The Vikings were left with only two healthy true running backs following injuries to Dalvin Cook and Bishop Sankey. Fullback C.J. Ham, however, has been on hand for snaps in the backfield.

Brown, 26, has only eight carries for 29 yards on the season. Last year, he had eight attempts for 82 yards and one score.