The Giants have terminated the contract of punter Brad Wing, reports Michael Elsen of Giants.com. The move will free up $1.025MM in cap space, according to ESPN’s Jordan Raanan (via Twitter). 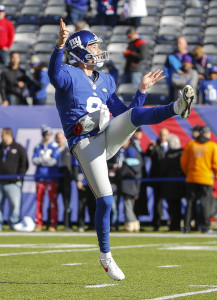 The 2013 undrafted free agent out of LSU seemingly found a home in New York, as he appeared in every game for the Giants since 2015. After being acquired by the organization in a trade with the Steelers, Wing went on to have solid campaigns for his team in 2015 and 2016. However, he took a step back last season, as his 36.7-yard net average ranked last among eligible punters. Elsen also notes that shorts punts against the Eagles and Buccaneers ultimately led to Giants losses.

As ProFootballTalk.com’s Michael David Smith writes, the Giants will likely look to improve their entire special teams core this offseason. Long snapper Zak DeOssie is now the only member of the grouping under contract in 2018.

1:13pm: Wing ‘s three-year extension is worth $6.45MM, according to Ian Rapoport of NFL.com (on Twitter). The deal also contains $3.725MM in guarantees, $2MM of which are coming to the punter via his signing bonus.

1:03pm: The Giants announced that they have signed punter Brad Wing to a contract extension. The new deal will take Wing through the 2019 season. Financial terms of the deal are not yet known.

Wing, acquired in a trade with the Steelers in September 2015, posted a 44.5-yard gross average and a 38.9-yard net average on 76 punts last season. He placed 33 punts inside the 20, had 10 touchbacks, and his long kick traveled 64 yards. As noted in the Giants’ press release, Wing tied a franchise single-season record with 33 punts inside the 20-yard line, matching watermark set by Brad Maynard in both 1997 and 1998.

In college, Wing played alongside Giants star Odell Beckham Jr. at LSU. After his time with the Tigers, he hooked on with the Eagles as a UDFA but wound up being waived at the end of training camp. In January 2014, Pittsburgh inked Wing to a reserve/future deal and he was able to make an impression as a rookie. In his first season with the Steelers, the Australian had a 43.7-yard gross average on his 61 punts with 20 kicks inside the 20-yard line. Still, Pro Football Focus wasn’t overly high his ’14 season, ranking him 28th out of the league’s 32 regular punters, with a -7.6 grade.

Wing earned the minimum salary in 2015, which worked out to about $510K for a player with his level of experience. This offseason, Wing was an ERFA, so he did not have the ability to test the open market.

Raiders restricted free agent Neiko Thorpe signed his tender today, as Aaron Wilson of The Houston Chronicle tweets. The 26-year-old defensive back had a career season in 2015, compiling career-highs in tackles (40), passes defended (six), and interceptions (one) while starting two of his 14 games.

The rest of today’s minor moves:

11:32am: The Steelers will get a conditional seventh-round pick for 2016 in exchange for Wing, according to Adam Schefter of ESPN.com (via Twitter).

10:41am: Shortly after having released veteran punter Steve Weatherford, the Giants have identified his apparent replacement. According to Aaron Wilson of the Houston Chronicle (via Twitter), the team has worked out a trade with the Steelers, acquiring punter Brad Wing in exchange for a late-round draft pick.

Wing, 24, punted 61 times for the Steelers in his rookie season in 2014, recording 43.7 yards per punt and a net average of 38.6 yards. Pro Football Focus wasn’t overly high on the LSU product’s performance, ranking him 28th out of the league’s 32 regular punters, with a -7.6 grade (subscription required).

Because he was only an exclusive rights free agent in the offseason, Wing is on a minimum salary deal, which works out to $510K for a player with his experience. His contract expires at the end of the 2015 season, but he won’t be able to hit the open market if the Giants want to keep him, since he’s set to be an ERFA again.

Ralph Vacchiano of the New York Daily News first reported that the Giants were discussing a Wing deal with Pittsburgh.

10:35am: According to Ralph Vacchiano of the New York Daily News (via Twitter), the Giants are discussing acquiring punter Brad Wing in a deal with the Steelers, though nothing is finalized yet.

10:20am: The Giants appear to be on the lookout for a new punter, as Rand Getlin of Yahoo! Sports reports (via Twitter) that the club has parted ways with veteran Steve Weatherford. New York also cut Robert Malone earlier this week, so the latest move leaves the team without a punter on its roster.

Weatherford, who turns 33 in December, spent the first five years of his NFL career with a handful of different teams before finding a more permanent home with the Giants in 2011. The Illinois product has been the team’s punter for each of the last four seasons, ranking 25th out of the league’s 32 qualified players at the position in 2015, per Pro Football Focus’ data (subscription required).

Earlier in the week, head coach Tom Coughlin strongly hinted that outside help would likely be brought in to challenge Weatherford for the Giants’ punting job this year.

“Well, there’s a game to go, and it’s going to be a competitive thing,” Coughlin said. “Not necessarily with the guys that are here. That goes for any position. Any position. People have to understand that. You’re not competing just against the guys here, you’re competing against the waiver wire.”

The Steelers have locked up punter Brad Wing for another season, signing him to a one-year contract extension, the team announced today in a press release. After spending his first full NFL season in Pittsburgh in 2014, Wing had been eligible for exclusive rights free agency, meaning he could only sign with the Steelers, unless the team let him go.

Wing, who turns 24 next week, punted 61 times, recording 43.7 yards per punt and a net average of 38.6 yards. Pro Football Focus wasn’t overly high on the LSU’s performance, ranking him 28th out of the league’s 32 regular punters, with a -7.6 grade (subscription required).

Because he was only an exclusive rights free agent, Wing is unlikely to receive more than the minimum salary, which will be $510K for a player with his experience. There may also be a signing bonus in the deal, but it would be very modest.

Here are Friday’s other minor moves from around the NFL, with any additional minor transactions added to the top of the list throughout the day: