The Steelers announced that they have signed running back Kalen Ballage to a one-year deal. Ballage, entering his fourth pro season, split the 2020 campaign between the Jets and Chargers.

After being drafted by the Dolphins in the fourth round of the 2018 draft, Ballage has appeared in 35 games across multiple stops. All in all, he has 629 yards off of 201 carries with seven touchdowns. He’s also tacked on 52 grabs for 285 yards. His best year came as a rookie — in an admittedly small sample size of 36 carries, the Arizona State product averaged 5.3 yards per tote.

The Steelers finished last in rushing yards per attempt last year, so they’re expected to prioritize RBs in the draft next month. Ballage won’t be the main ball-carrier in Pittsburgh, but he can offer support for the lagging group.

“We’ve got to be a lot better in running,” team president Art Rooney II said recently. “Certainly we don’t want to see the Pittsburgh Steelers being last in the league in rushing again ever. I think it’s something our coaches are focused on and we’ll be looking for ways to improve in the draft. It’s something we’ve got to fix, and we are working on it.”

A knee injury will sideline Jackson and continue to change the Chargers’ backfield plans. Ballage played extensively last week after Jackson went down early. He, Joshua Kelley and Troymaine Pope will be Los Angeles’ running backs in Miami.

Ekeler remains on the Bolts’ IR because of a severe hamstring injury. No rumors have surfaced indicating his return is near. A 2018 seventh-round pick out of Northwestern, Jackson stepped in to replace Ekeler alongside Kelley and has averaged 4.1 yards per carry in his third NFL season.

Ballage gained 69 yards on 15 carries last week, doing so after Jackson went down and while Pope was out due to a concussion. Pope practiced fully throughout this week. The Bolts signed Ballage after the Jets waived him earlier this year. This will mark a return trip to Miami for Ballage, a Dolphins fourth-round pick in 2018. Ballage largely struggled with Miami, and the team ended up cutting him after an attempt to trade him failed this summer.

Kalen Ballage‘s stint with the Jets didn’t end up lasting too long. New York is releasing the running back, the team announced Monday afternoon. 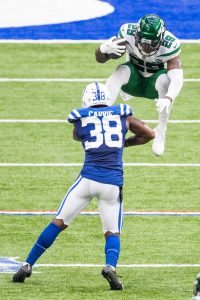 The Jets originally agreed to a trade with the Dolphins to land Ballage at the end of August, then canceled the deal after he failed his physical. Then they signed him as a free agent a few weeks ago, and he appeared in each of their last three games. He played a sizable role on passing downs, and had five catches for 44 yards in Week 3 against the Colts. Ballage was familiar with head coach Adam Gase from their time in Miami together.

His release is a good sign that the Jets expect Le’Veon Bell to be ready to return from his hamstring injury this week when they take on the Cardinals. A fourth-round pick out of Arizona State in 2018, Ballage seemed decent enough as a rookie before putting up dreadful numbers last year.

Kalen Ballage isn’t going to the Jets after all. Ballage failed his physical with a hamstring injury, prompting the Jets to nix their trade with the Dolphins (Twitter link via Ian Rapoport of NFL.com).

The Jets are still intrigued by Ballage’s skillset and Rapoport hears that he could circle back to Gang Green once he’s healthy. But, for now, he’ll revert to the Dolphins, who are expected to cut him. The Jets, meanwhile, may have a little extra urgency in their running back search after rookie RB La’Mical Perine injured his ankle during practice on Sunday. If it’s more than a mild sprain, the Jets will need some additional support behind top rushers Le’Veon Bell and Frank Gore.

In other Jets news, the drama between Bell and Adam Gase does not appear to be over. Bell took issue with the head coach pulling him from a scrimmage and the veteran running back has not impressed thus far in training camp.

Earlier today, the Dolphins toldd Kalen Ballage that he was getting cut. Instead, they’re trading the running back to the rival Jets, as Ian Rapoport of NFL.com tweets. In exchange, Miami will receive a conditional late-round draft choice.

It’s a situation that plays out often in the NFL. Before formally releasing a player, teams will often leak word of their impending release to reporters. That sometimes prompts teams further down the waiver wire to make a call. In this case, it worked out for the Dolphins, who will be receiving something, rather than nothing, for their former fourth-round pick.

In an admittedly small sample size of 36 carries, Ballage averaged 5.3 yards per attempt as a rookie. He was far less impressive last season, but the Jets could find a role for him behind starter Le’Veon Bell and RB2 Frank Gore.

The Dolphins are set to release running back Kalen Ballage, as Ian Rapoport of NFL.com tweets. Ballage had lots of hype as a rookie in 2018, but the former fourth-round pick managed just 135 yards off of 74 carries last year.

Ballage, a taller-than-average RB at 6’3″, averaged 4.4 yards per carry while at Arizona State. As a rookie, he showed promise as a supporting cast member behind Kenyan Drake and veteran Frank Gore. In an admittedly small sample size of 36 carries, Ballage averaged 5.3 yards per attempt. Unfortunately, he regressed in 2019 and failed to make significant strides as a receiver.

Now, the league’s 31 other teams will have an opportunity to claim Ballage off of the waiver wire. If he is not picked up in the next 24 hours, the 24-year-old will be free to sign with any club of his choosing.