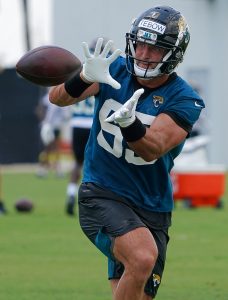 Daniel Ross has a chance to return to Jacksonville. After ending last season with the Jaguars, the free agent defensive tackle auditioned for the team earlier today, reports ESPN’s Field Yates (via Twitter).

While the defensive lineman certainly isn’t a household name, he has one of the better success stories in the NFL. Ross played a few seasons at Northeast Mississippi Community College (a school that boasts a handful of NFL players, including former Pro Bowler Jerome Woods), and he spent a handful of years bouncing around the CFL, including a 2015 campaign that was scrapped due to a knee injury.

After going undrafted during the 2017 draft, he joined the Texans for the preseason, and he spent most of his rookie season on the Lions and Chiefs practice squads. He was signed by the Cowboys late in the season, and he appeared in three games down the stretch, compiling five tackles, one sack, and one fumble recovery.

Ross ended up getting into 13 games with Dallas in 2018, collecting one sack, one forced fumble, and seven QB hits. He missed the entire 2019 season due to a shoulder injury, but he still managed to catch on with the Raiders last offseason. He appeared in three games for his new team before getting cut in December, and he appeared in two games for the Jaguars after getting claimed off waivers.

After aggravating a previous thumb injury in Week 3, Damon Arnette will see his rookie season paused for a while. The Raiders placed the first-round cornerback on IR.

Arnette initially broke his thumb during training camp but landed on it awkwardly against the Patriots last week. As a result, the Raiders will be without a key defensive piece for a while. Arnette underwent thumb surgery this week and will be out at least six weeks.

The suddenly potent Bills passing offense will face a Raiders team ranking 31st in defensive DVOA, though the unit sits 18th in DVOA against the pass through three weeks. The Raiders may also be down rookie cornerback Amik Robertson, who is questionable with a non-coronavirus illness. Arnette has started each of the Raiders’ games this season.

Las Vegas looks also set to be without its other 2020 first-rounder against Buffalo. The Raiders listed Henry Ruggs as doubtful to face the Bills. Ruggs is battling knee and hamstring injuries.