Tua Tagovailoa is officially back. The Dolphins have activated the quarterback off injured reserve. While Michael David Smith of ProFootballTalk.com observes that Tagovailoa is listed as questionable, Ian Rapoport of NFL Network tweets that the QB will start tomorrow in London. 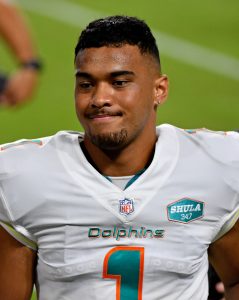 Tua hasn’t played since suffering a rib injury during Miami’s Week 2 loss to the Bills. He was placed on IR in late September, and he was designated to return from IR earlier this week. While the QB got a week of practice under his belt, it was still uncertain if the organization would fly the former first-round pick across the Atlantic Ocean in order to play the winless Jaguars in London tomorrow. Ultimately, it sounds like Tagovailoa will be under center for his squad at Tottenham Hotspur Stadium.

Jacoby Brissett has been filling in as the starting QB in Tua’s absence, throwing four touchdowns in three starts.

The Dolphins made two additional moves this morning, promoting wideouts Isaiah Ford and Kirk Merritt from the practice squad.

The Dolphins announced a 10-man UDFA class Wednesday. Here is the full list:

The Dolphins saw 2019 UDFA Preston Williams make an impact as a rookie and will give two more a shot. A Washington transfer, Sterk recorded a Division I-FCS-best 15 sacks last season. Cole averaged 21.8 yards per catch for his Division II program last season. Merritt, who also played at Oregon, caught 153 passes for 1,811 yards and 19 touchdowns between his junior and senior seasons at the FCS level.

Jones started three seasons for Ole Miss and led SEC nose tackles with 30 stops last season. He finished with 10.5 career sacks as well. Staley started three seasons for the Gamecocks, making 23 starts at center and 11 at left guard. The Dolphins will guarantee $65K of Render’s salary, with $15K coming via signing bonus, according to the Houston Chronicle’s Aaron Wilson (on Twitter). Render forced two fumbles and recorded 3.5 sacks last season.