The Cowboys lost longtime cornerback Anthony Brown to a season-ending Achilles tear in Week 13. They will add an experienced option in the wake of that development.

After signing with the Dolphins midway through training camp, Alexander sustained an injury that led him to Miami’s IR. The Dolphins reached an injury settlement with the six-year veteran, allowing him to head back to free agency and sign elsewhere to retain 2022 eligibility. Had no settlement been reached, Alexander would have been unable to return from the Dolphins’ IR. Alexander underwent groin surgery this summer.

Alexander, 29, has worked primarily in the slot as a pro. He held that role for Minnesota during much of Mike Zimmer‘s tenure, playing out his rookie contract in the Twin Cities and then returning in 2021 after a Cincinnati one-off. Following Zimmer’s firing, the team did not bring him back; it instead inked ex-Packers slot Chandon Sullivan to a free agency accord. Alexander has 84 career games under his belt; he played 61% of Minnesota’s defensive snaps last season.

Jerry Jones had said the Cowboys would seek out cornerback help but did not express optimism. Alexander being both in his 20s and available at this point in the season could be a break for the contending team. The Cowboys also lost Jourdan Lewis to a season-ending injury in October. They finished Sunday night’s game with DaRon Bland and Kelvin Joseph as the primary options alongside Trevon Diggs. Joseph saw more action as a result of Brown’s injury.

Mackensie Alexander‘s time with the Dolphins may be short-lived. The team placed the veteran cornerback on injured reserve Tuesday.

Due to the IR placement coming before roster cutdown day, the former Vikings and Bengals cover man cannot come off the injured list four games into the season. Players carried through to the 53-man roster can do so, but IR placements at this point on the calendar prevent such transactions.

The Dolphins signed Alexander eight days ago. An injury settlement could lead the seventh-year defender off Miami’s IR list and back into free agency at some point this year — that is, if this is not viewed as a season-ending injury. Alexander, 28, could rejoin the Dolphins post-settlement. For now, however, he is off the team’s 80-man roster.

Best known for his role as Minnesota’s slot corner, Alexander spent five months in free agency this offseason. The former second-round pick is coming off a season in which Pro Football Focus graded him as the league’s worst full-time corner. Alexander, however, has been a regular throughout his career. The Vikings made the Clemson product a key part of Mike Zimmer‘s quality defenses throughout his rookie contract during the late 2010s, and the Bengals gave him $4MM to sign in 2020.

The Dolphins signed the 28-year-old defender to a league-minimum accord, guaranteeing him $138K. The team has not seen 2020 first-rounder Noah Igbinoghene step up as a reliable slot player alongside veterans Xavien Howard and Byron Jones. Miami also did not re-sign Justin Coleman this offseason; Coleman is back in Seattle. The team did place a second-round tender on Nik Needham, however. This Alexander move could prompt the team to resume a search for corner depth. Dozens of defensive backs will become available next Tuesday, when teams trim their rosters from 80 to 53.

In need of depth at the position, the Dolphins worked out a pair of free agent corners earlier today. In the case of Mackensie Alexander, that has resulted in a contract (as confirmed, on Twitter, by his agent).

The 28-year-old was a second-round pick of the Vikings in 2016. He played sparingly during his first two seasons, though he recorded his first career interception in 2017. The following year, he registered his first six NFL starts, and totaled 10 pass deflections and four sacks. The Floridian signed in Cincinnati as a free agent in 2020, where he played the highest snap percentage (75%) of his career.

Alexander returned to Minnesota last season, but had the worst season of his career in terms of pass coverage, surrendering five touchdowns and a passer rating above 119. At the onset of free agency, it became clear that the Vikings would not be re-signing him. After nearly the entire offseason, he has now found a roster spot.

Miami has Xavien Howard, Byron Jones and Nik Needham at the top of their CB depth chart, though Jones remains a question mark from a health perspective to be available by the start of the regular season. The team was very much in need of reinforcements behind that trio, especially after training camp standout Trill Williams suffered a torn ACL during their first preseason game.

Alexander will provide Miami with experienced depth at a minimum, something which was lacking at the No. 4 corner spot before today. He is also capable of stepping into a starting role, however, which could turn this signing into an effective one. Alexander’s arrival could also, notably, put 2020 first-rounder Noah Igbinoghene on the roster bubble, as noted by Barry Jackson of the Miami Herald (Twitter link).

In addition to Alexander, the Dolphins worked out UDFA Raleigh Texada, who had a five-year career at Baylor (Twitter link via Aaron Wilson of Pro Football Network). He likely won’t be needed now, with Alexander on the books.

We’re uncertain where free agent cornerback Mackensie Alexander will play in 2022, but it definitely won’t be in Minnesota. According to Chris Tomasson of the St. Paul Pioneer Press (on Twitter), the Vikings won’t be re-signing the defensive back. 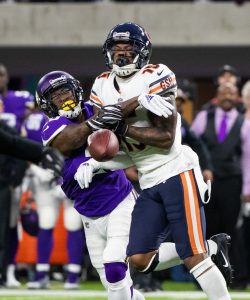 Fortunately for Alexander, he’ll be able to continue his career elsewhere. According to the reporter, there are “several teams interested” in the cornerback.

The 2016 second-round pick spent the first four seasons of his career in Minnesota before moving on to Cincinnati in 2020. He returned to Minnesota for the 2021 campaign and ended up collecting a career-high 51 tackles in 16 games (five starts).

The Vikings could have a completely different looking cornerbacks corps in 2022. Patrick Peterson is also a free agent, and some draft pundits have predicted that the organization will select a cornerback in the first round of the upcoming draft.

Vikings To Bring Back Mackensie Alexander

After a season in Cincinnati, Mackensie Alexander will return to the Twin Cities. The veteran cornerback agreed to terms with the Vikings on Friday night, according to his agent (Twitter link).

Alexander joined Trae Waynes in moving from the Vikings to the Bengals last year but will return to the team that drafted him in the 2016 second round. The Vikings made Alexander an offer during the legal tampering period; 10 days later, the slot corner committed to come back to Minnesota.

It’s a one-year deal worth the veteran minimum, Courtney Cronin of ESPN.com tweets, marking a considerable reduction from Alexander’s 2020 salary.

Although the Clemson product will wear a familiar uniform next season, he will mostly have new teammates in Minnesota’s secondary. Waynes is still under contract with the Bengals, who gave him a long-term deal while agreeing with Alexander on a one-year pact worth $4MM last March, and Xavier Rhodes will return to the Colts. The Vikings still have Mike Hughes, but their cornerback corps now features recent acquisition Patrick Peterson and 2020 draftees Jeff Gladney and Cameron Dantzler.

Following the Vikings’ defense falling to a Mike Zimmer-era low point, their coverage corps will feature more experience in 2021. Alexander, 27, worked as a nickel cog under Zimmer during his first Minnesota stint. Last season, Alexander started a career-high 13 games with the Bengals; Pro Football Focus graded the five-year vet as a middle-of-the-pack cornerback. He will be back in a familiar scheme next season.

Vikings Have Made Offer To CB Mackensie Alexander

Mackensie Alexander could land back in Minnesota. Ben Goessling of the Star Tribune reports (via Twitter) that the Vikings have interest in the veteran cornerback. Sources tell Goessling that Minnesota has made an offer to the free agent cornerback.

Alexander spent the first four seasons of his career with the Vikings, starting 10 of his 55 appearances. The veteran’s final season in Minnesota came in 2019, when he compiled 38 tackles, 0.5 sacks, and one interception in 13 games (four starts).

He joined the Bengals last offseason on a one-year, $4MM deal. He ended up starting a career-high 10 games for Cincinnati, collecting 47 tackles, six passes defended, and one interception. He also appeared in a career-high 61-percent of his team’s defensive snaps in 2020.

The Vikings have been relatively quiet over the past few days. The team’s one notable addition was the signing of nose tackle Dalvin Tomlinson. The team entered the offseason with just over $9MM in cap space.

THURSDAY, 9:57am: Alexander’s father has been found alive and well, as Jay Morrison of The Athletic tweets. Mackensie and other family members are on their way to see him today.

Meanwhile, Alexander has been charged with a misdemeanor stemming from his run-in with a person who saw him just prior to his disappearance.

Alexander signed with the Bengals this offseason, coming to Cincinnati after four seasons in Minnesota. The former Vikings second-round pick agreed to a one-year, $4MM deal to join the Bengals.

This marks the second time in three weeks a Bengals player has left camp because of a family emergency. Wide receiver John Ross departed two weeks ago to care for his coronavirus-stricken son. Ross has since returned to the team.