We heard earlier this week that Dak Prescott was eyeing a Week 5 return, but Week 6 may end up being a more realistic target. Clarence Hill Jr. of the Dallas Star-Telegram tweets that Prescott won’t start throwing until the end of this week. Assuming the QB wants more than a week to ramp up, the Cowboys’ October 16 game against the Eagles may be a more realistic return date.

Prescott has been soft tossing but has yet to progress to “real throwing.” The fact that he’s throwing at all has led some to wonder if the quarterback could even return in Week 4 against Washington. Hill completely rules out that notion, and he suggests Prescott won’t even be ready for the Week 5 contest against the Rams.

Dallas can operate with a bit more caution after backup Cooper Rush has helped guide the Cowboys to wins over the Bengals and Giants. The team can continue to operate with some flexibility after not placing Dak on injured reserve, a move that would have kept him off the field through Week 5.

More notes out of Dallas…

For players who are currently injured, but are expected to be available at some point during the season, teams are required to name them to their initial 53-man rosters before placing them on injured reserve. A team announcement confirmed on Wednesday that the Cowboys have done just that with left tackle Tyron Smith and wideout James Washington.

Neither move comes as a surprise, of course. Smith suffered a hamstring tear in practice last week, and faces a long road to recovery. The required surgery is expected to keep him sidelined until at least December, an absence which will be widely felt in Dallas’ offense. The 2010s All-Decade member has been a mainstay on the Cowboys’ o-line since 2011, and internal replacement options are highly lacking in experience.

That list includes first-round rookie Tyler Smith – though the team’s intention was to bring him along slowly, and at guard to begin his NFL career. Remarks from coach Mike McCarthy confirm that, out of necessity, that plan has changed (Twitter link via The Athletic’s Jon Machota). Swing tackle Josh Ball could also fill in as a blindside protector, but the Cowboys have widely been reported as being active in search of outside options. That most recently included an attempt to trade for former Jet Chuma Edoga, but the deal fell through.

Washington, meanwhile, is partway through the recovery process from surgery to repair a foot fracture suffered at the beginning of the month. The timeline (ranging from six to 10 weeks) made him a logical IR candidate to begin the regular season. His absence will compound that of Michael Gallup, who is recovering from an ACL tear. Washington’s production fell off in Pittsburgh, but the lack of established options aside from Gallup (when healthy) and CeeDee Lamb should leave him with a path to significant snaps.

At some point, both Smith and Washington should return, which would inevitably give the Cowboys’ offense a boost. With the roster spots made open by the move, Dallas brought back long snapper Jake McQuaide and defensive back C.J. Goodwin after their temporary releases yesterday.

7:25pm: The Cowboys will be without one of their new receiving weapons to start the season as wideout James Washington has suffered a foot injury today in training camp, according to Todd Archer of ESPN. The former second-round pick will undergo surgery tomorrow and is looking at six to ten weeks of recovery after suffering a fractured right foot.

Cowboys fans must be sick and tired at this point of fractures in their athletes’ feet. A fifth-metatarsal fracture held former star wide receiver Dez Bryant out for six weeks in 2015, and DeMarcus Lawrence for 10 games last season. If Washington is out for the minimum prediction of six weeks, that will hold him out through the first week of the season.

3:40pm: The Cowboys’ new-look receiving corps will be lighter on experience this year, and a Monday injury may push this situation more in that direction. 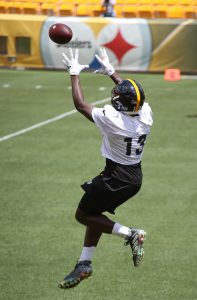 After being carted away from practice, James Washington is feared to have suffered a Jones fracture in his foot, Adam Schefter of ESPN.com tweets. The offseason addition is going through an MRI. The exam confirming these fears would lead to a lengthy absence for Washington, who was likely to be a key contributor for the Cowboys — especially early in the season.

Jones fractures shelved both Derrick Henry and Deebo Samuel over the past two seasons. Henry missed more than two months of action because of his injury, though the Titans were careful with their All-Pro running back and held him out through their first-round bye. Samuel, who suffered his Jones fracture in mid-June 2020, did not return until early October of that season.

Although Washington had fallen out of favor in Pittsburgh, Dallas added him as part of its post-Amari Cooper mix. The team will not have recently re-signed Michael Gallup to start the season, with the fifth-year target confirming his ACL tear will not allow for a Week 1 return. The Cowboys used a third-round pick on South Alabama’s Jalen Tolbert as well. The team also returns veteran role player Noah Brown, a sixth-year contributor. CeeDee Lamb, of course, will be the team’s top target after the trade of Cooper.

Washington, a 2018 second-rounder who saw the Steelers continue their run of Day 2 wideout picks with Diontae Johnson (2019) and Chase Claypool (2020), has a 735-yard receiving season on his resume. The Oklahoma State product got there alongside ex-college teammate Mason Rudolph in 2019. But Johnson and Claypool surpassed him with the Steelers in subsequent years, and the team — as it does with most of its wideout talent — let him walk after his rookie deal expired.

James Washington is on-site with his new team, but not conducting any on-field work right now. The wideout is sidelined by a foot injury, per a report in the Dallas Morning News.

As it details, the 26-year-old is wearing a walking boot on his left foot, which will likely keep him off the field for all of this month’s voluntary work. While Washington did “downplay its severity”, the ailment is of course delaying his first formal reps with Dak Prescott and the Cowboys’ offense. On the other hand, the Oklahoma State product said that he will be available in time for minicamp in mid-June.

Washington signed in Dallas after hitting free agency for the first time. His time in Pittsburgh was marked by significant optimism at one point, especially following the 2019 campaign. That year, he posted 44 catches for 735 yards and three touchdowns. Having only registered nine starts and made 54 receptions since then, however, it came as no surprise that he departed at the end of his rookie contract.

Washington will have a strictly complimentary role to play in Dallas’ offense, given the presence of fellow wideouts CeeDee Lamb and Michael Gallup, as well as tight end Dalton Schultz. After the team traded away Amari Cooper and saw Cedrick Wilson depart in free agency, though, there figures to be significant snaps available for him. Overall, he is remaining optimistic that he will be able to develop chemistry in time to make his presence felt once the season starts.

“I’m getting mental reps” he said. “We can always develop timing and get on the same page.”

After losing two key members of their receiving corps, the Cowboys are adding a new wideout. The team is signing James Washington to a one-year deal (Twitter link via ESPN’s Adam Schefter).

Washington, who will be 26 next season, is a native of Texas. He had spent four seasons with the Steelers, who drafted him in the second round in 2018. Many felt he would be the next in a long line of productive wideouts developed in the Steel City, especially when he posted 44 catches for 735 yards and three touchdowns in his second season.

However, he has seen his role reduced since then. As the team has continued drafting at the position, bringing in Diontae Johnson and Chase Claypool, Washington has been on the field for less than half of the team’s plays in each of the past two seasons. During that stretch, he totalled 54 receptions for 677 yards and seven touchdowns.

The news comes after the Cowboys traded Amari Cooper to the Browns and saw Cedrick Wilson leave for Miami in free agency. While the team still has CeeDee Lamb, along with franchise-tagged tight end Dalton Schultz, the vacancy left by the former two should leave plenty of opportunities for the once (Oklahoma State) Cowboy.

Meanwhile for the Steelers, this marks the second departure in the WR corps in a matter of hours. JuJu Smith-Schuster reportedly agreed to a one-year deal in Kansas City earlier today. There is now an opening on their roster to add at least a complimentary pass catcher.

Going into the last year of his contract, Patriots punter Jake Bailey was set to earn a base salary of $925,000 for the 2022 NFL season. Due to a proven performance bonus that was triggered when Bailey was selected to the 2020 Pro Bowl, Bailey is on track to be the NFL’s highest-paid punter with a 2022 salary of $3.98MM, according to Mike Reiss of ESPN.

A knee injury limited Bailey in the 2021 season which saw him struggle to live up to his expected salary. It’s now assumed that the Patriots will begin working towards a contract extension to lessen the cap hit Bailey is posed to hold. In a normal situation, the Patriots might want to see another season of success out of Bailey after a down 2021, but Bailey’s raise puts a little pressure on New England to work out a deal sooner rather than later.

Here are a few more notes from around the AFC, starting with a note from the Steel City:

Out since Week 5 with a shoulder injury, JuJu Smith-Schuster is now back at Steelers practice ahead of their playoff opener. The Steelers designated the fifth-year wideout to return from IR on Thursday.

With Smith-Schuster’s shoulder issue deemed season-ending three months ago, this is certainly an interesting development. A practice return does not necessarily mean he will play against the Chiefs; Mike Tomlin was noncommittal on that subject. JuJu coming back would obviously help the Steelers as big underdogs in Round 1.

Smith-Schuster is believed to be healthy, per Gerry Dulac of the Pittsburgh Post-Gazette (on Twitter). However, the Steelers are not yet banking on him to be back for Sunday night’s game. JuJu has not experienced any issues in two practices this week, per Ian Rapoport of NFL.com (video link), pointing to an activation ahead of Saturday’s deadline.

Smith-Schuster passed on offers to sign with the Chiefs and Ravens last year, preferring his familiar Steelers setup as an avenue to a potentially more lucrative free agency payday. This injury did not help Smith-Schuster’s quest for a better market in 2022, when the cap spike should help many UFAs cash in after last year’s COVID-19-induced cap reduction. Interest should still come JuJu’s way in March, but the former second-rounder’s stock has dipped since his 1,426-yard season alongside Antonio Brown in 2018.

Amid Ben Roethlisberger‘s decline, the Steelers rank 15th in passing. Diontae Johnson notched his first 1,000-yard season, while Chase Claypool ended the regular season with 860 receiving yards. Pat Freiermuth has become a key target as a rookie. Those three are signed beyond this season. James Washington, whom the Steelers activated from the reserve/COVID-19 list Thursday, joins Smith-Schuster as a free agent-to-be.