In last night’s preseason game, the Dolphins suffered a significant injury in their secondary. Cornerback Trill Williams was carted off the field, and it has been confirmed today that he suffered a torn ACL (Twitter link via PFF’s Doug Kyed). 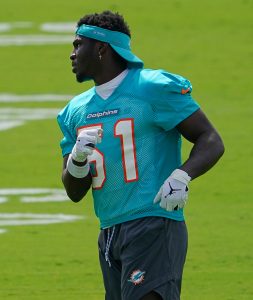 The 22-year-old played in one game with the Dolphins last season as a rookie. Given his performance in training camp this year, the former UDFA was expected to be in contention for the fourth CB spot on Miami’s depth chart. Instead, he will now undergo surgery and miss the 2022 campaign in its entirety.

Pro Football Network’s Aaron Wilson tweets that the affected knee is one which has already suffered an ACL tear. As a result, the Syracuse alum’s recovery will be even more heavily scrutinized as he looks to land on an NFL roster again next season. The six-foot-one, 205-pounder had a productive college career with 92 tackles, four interceptions (one of which was returned for a touchdown) and another major on his only punt return.

In Williams’ absence, the Dolphins still have their starting trio at the CB position in Xavien Howard, Nik Needham and Byron Jones (whose regular season availability remains something of a question mark at this point). Depth, however, will now become even more of a sore spot on the roster, and the team is “evaluating outside options,” per Barry Jackson of the Miami Herald (Twitter link).

A number of notable veterans remain on the market at the position, including the likes of Trae Waynes, Joe Haden, Chris Harris and Xavier Rhodes. With nearly $20MM in cap space to work with, the Dolphins could easily afford an addition or two for experienced depth. Their top internal options for the No. 4 spot, meanwhile, are Keion Crossen and Noah Igbinoghene.