OCTOBER 10: The Cardinals announced on Monday that Wesley will miss the remainder of the season as a result of the injury, marking another blow to the team’s WR corps.

OCTOBER 7: The Cardinals have dealt with considerable inconsistency regarding their wide receiver availability this season. DeAndre Hopkins‘ PED suspension has obviously overshadowed this position group, but injuries to Rondale Moore, A.J. Green and Antoine Wesley have as well. 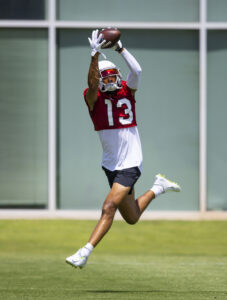 Designated for return from IR after landing on the injured list because of groin and hip issues, Wesley suffered a quadriceps injury during practice this week, according to ProFootballNetwork.com’s Aaron Wilson. The Cardinals fear Wesley sustained a torn quad, per Wilson, who adds the young receiver has an MRI scheduled Friday.

This injury would threaten to end Wesley’s season before it begins. The Cardinals have 21 days to activate Wesley from IR, or else he reverts to their season-ending injured list. Although Wesley has returned to practice, he would not count toward Arizona’s eight IR activations if he is not moved onto the team’s 53-man roster.

Still, this would be another blow for the Cards’ receiving corps. Amid Hopkins’ injury trouble last season, Wesley served as an auxiliary target for Kyler Murray. The former Kliff Kingsbury Texas Tech charge caught 19 passes for 208 yards and three touchdowns in his first Cardinals season (and first year of game action). His two TDs against the Cowboys did well to help a slumping Cards team move past Hopkins’ injury and into the playoffs.

Moore returned from his hamstring injury to debut in Week 4, and while Wilson adds the 5-foot-7 slot target suffered a knee injury in practice Thursday, the Cardinals believe he avoided a serious issue. Moore is expected to play against the Eagles on Sunday. Two games remain on Hopkins’ suspension.