The Eagles believe that defensive end Brandon Graham has suffered a torn Achilles (Twitter link via NFL.com’s Ian Rapoport). He’ll undergo additional testing tomorrow to confirm, but team doctors are pretty sure about this one. 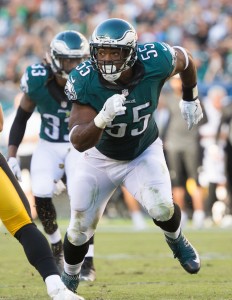 Graham was forced out of Sunday’s game against the Niners and the Eagles went on to lose 17-11. Even though they can turn to accomplished veteran Ryan Kerrigan and Josh Sweat, it’s still a bad blow to the Eagles’ pass rush.

“Terrible. He’s one of the best humans, best guys I’ve played with. He’s the heartbeat of this team,” longtime teammate Lane Johnson said (Twitter link via Josh Tolentino of the Philadelphia Inquirer).

Graham, who’s been with the Eagles since 2010, inked a three-year, $40MM extension with the Birds in 2019. He delivered some of his best work last year, notching eight sacks and 46 stops en route to his first — and long overdue — Pro Bowl nod. Unfortunately, his Achilles tear will effectively wipe out his 2021 season. And, after this year, he’ll be out of contract.

The Eagles are also awaiting word on Brandon Brooks‘ chest injury. The early word is that it’s a torn pec (Twitter link via RapSheet), but the guard’s availability will hinge on the severity of the tear. If it’s only a partial tear, the Eagles could see him back on the field before the season is through.