The Lions have extended one of their key special teamers. NFL Network’s Ian Rapoport reports (via Twitter) that Detroit has signed Jack Fox to a three-year extension. 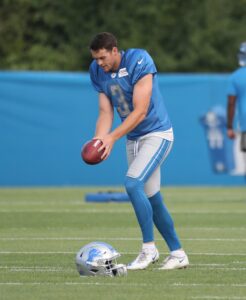 The deal is worth $3.775MM annually, making him the highest-paid punter in the NFL. Seahawks punter Michael Dickson previously paced the position with a $3.67MM AAV. Fox will also get $7MM guaranteed, which only trails Dickson ($7.5MM) among punters.

Per Rapoport, the organization used their Week 6 bye to negotiate a new contract with Fox. The 26-year-old was set to hit restricted free agency following the season.

The 2019 undrafted free agent out of Rice originally joined the Chiefs out of college before catching on with the Lions. After sitting on the practice squad for much of his rookie year, he got into 16 games in 2020, earning himself a second-team All-Pro spot and a Pro Bowl nod. He got into 17 games for Detroit last season, averaging 48.8 yards per punt. He re-signed with the Lions after the 2021 campaign.

In five games this year, Fox’s 16 punts have traveled a distance of 48.8 yards, good for ninth in the NFL. While Pro Football Focus only ranks him 23rd among 32 punters at the moment, Fox graded much more favorably through his first two years in the league (including a #1 ranking in 2020).