The Steelers announced that they’ve agreed to terms with wide receiver Saeed Blacknall, who formerly suited up for the XFL’s Los Angeles Wildcats. 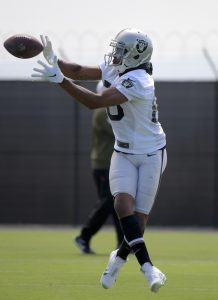 Blacknall, 24, latched on with the Raiders in 2018 after going undrafted out of Penn State. He bounced on and off Oakland’s practice squad during his rookie season, but did manage one regular season appearance on the club’s active roster.

In 2019, Blacknall spent time with the Dolphins and Cardinals, but didn’t see any game action. He was drafted by the Wildcats in November and appeared in three of the team’s five games, catching four passes for 120 yards and two touchdowns.

END_OF_DOCUMENT_TOKEN_TO_BE_REPLACED

Taylor is an undrafted rookie who played his college ball at D-II Ferris State. He originally signed as an UDFA with the Buccaneers after the draft, but didn’t last long in Tampa Bay. The Packers already have a bunch of young receivers on the roster, so he’ll be facing an uphill climb to even make the practice squad.

Blacknall is a speedster who went undrafted out of Penn State last year. He signed with the Raiders and after some impressive moments during the preseason he made the practice squad. He was briefly signed to the active roster in November, so he does have one NFL game under his belt. Blacknall could have a legit shot of making the team since the Dolphins are entering a full-blown rebuild and will be looking for as much young talent as possible.