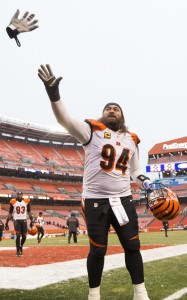 Free agent defensive tackle Domata Peko met with the Cardinals this week, per the league’s official workout sheet. Peko reportedly turned down several offers over the summer with a focus on finding the “right fit, city, and chance to win.” Now, he may find that opportunity with the 6-3 Cardinals as a fill-in for Corey Peters.

If signed, Peko would suit up for his 15th NFL season. The 35-year-old has 208 games of NFL experience to his credit and a reputation as a reliable run-stuffer. Even if he’s only asked to play on early, obvious run downs, he could be a key contributor for the Cardinals as they make their playoff push.

After 11 years with the Bengals, Peko spent 2017-18 with the Broncos before latching on with the Ravens last November. He appeared in seven games and made three starts for Baltimore in the regular season while racking up 14 tackles. Peko has been a rock throughout his career, missing only seven games since coming into the league as a 2006 fourth-round pick. Among pure defensive tackles, Peko’s 189 career starts rank the NFL’s all-time top ten.

After DeAndre Hopkins‘ unbelievable touchdown grab to beat the Bills, the Cardinals will look to keep the momentum going tonight against the Seahawks.

Domata Peko Has Turned Down Offers

Free agent defensive tackle Domata Peko has turned down offers from several clubs, according to Tom Pelissero of NFL.com (Twitter link), who adds Peko is focused on locating the “right fit, city, and chance to win.”

Peliserro reported in late July that Peko was interested in continuing his career and had garnered interest from multiple teams. Entering what would be his 15th NFL season, Peko wants to remain in the NFL despite the current COVID-19 climate, and it appears he’ll have the chance to do so.

Now 35 years old, Peko has 208 games of NFL experience under his belt. Largely a run-stuffer, Peko could offer a veteran presence on many defensive lines even if he’s only asked to play on early, obvious run downs.

After 11 years with the Bengals, Peko spent 2017-18 with the Broncos before latching on with the Ravens last November. He appeared in seven games and made three starts for Baltimore in the regular season while racking up 14 tackles.

Domata Peko may be on track for a 15th NFL season. Several teams are interested in the veteran defensive tackle, Tom Pelissero of NFL.com tweets.

Peko has been a rock during his career, missing only seven games since coming into the league as a 2006 fourth-round pick. He was a full-time starter from 2007-18. Among pure defensive tackles, Peko’s 189 career starts rank eighth in NFL history. Ten more starts would move him into the top five on this list.

With the Ravens, Peko played 140 defensive snaps in his half-season of work but logged three starts despite the late arrival.

This news comes shortly after Peko’s cousin, Kyle Peko, opted out from the 2020 Broncos season. The Pekos were teammates in 2017. The elder Peko could well find a team soon, especially as the list of COVID-19-related opt-outs continues to expand.

The Ravens have signed veteran defensive tackle Justin Ellis, as Ian Rapoport of NFL.com reports (via Twitter). Ellis was a regular member of the Raiders’ D-line since Oakland selected him in the fourth round of the 2014 draft, and he even landed a three-year, $15MM contract with the Silver-and-Black in March 2018. But his 2018 season was marred by injury, and he was released with an injury settlement in October.

And while Baltimore scored its fifth straight win on Sunday, its defensive front was noticeably shaky, perhaps because starting DT Michael Pierce played just three snaps. Pierce exited the game against the Bengals with an ankle injury, and head coach John Harbaugh said that an MRI didn’t reveal any long-term concerns. But as Jeff Zrebic of The Athletic writes, Harbaugh was non-committal as to whether Pierce would be available for this Sunday’s crucial matchup with the Texans, instead calling Pierce’s status “day-to-day.”

In addition to Ellis, the Ravens are adding another free agent DT, Domata Peko, as Zrebiec tweets. The Ravens, who are intimately familiar with the long-time Bengal’s work, attempted to sign him earlier this season, but the two sides were unable to agree on terms at the time. Tom Pelissero of the NFL Network reports that Baltimore will pay Peko $1MM for the remainder of the season (Twitter link).

Neither Ellis nor Peko are likely to create much of a pass rush in the interior of the line — which Baltimore could really use — but like the Ravens’ earlier additions of linebackers Josh Bynes and L.J. Fort, both are experienced veterans who understand their assignments and who should, if nothing else, solidify the run defense. That will be essential given Pierce’s uncertain health and the fact that the Ravens are putting rookie DT Daylon Mack on injured reserve, per Zrebiec.

Baltimore, at 7-2 and in first place in AFC North, is doing everything it can to keep the second-place Steelers at bay while pushing for a postseason bye. Zrebiec says the club is expected to add rookie CB Iman Marshall to the active roster this week, and given that the Ravens’ kickoff and punt coverage teams have been uncharacteristically unsteady, Marshall may be asked to bolster those units.

In a corresponding move, the Ravens have waived return man Cyrus Jones, per Zrebiec. Jones muffed a punt in the team’s win over the Patriots in Week 9, and Baltimore signed De’Anthony Thomas shortly thereafter. Thomas operated as the kickoff and punt returner on Sunday and will presumably remain in that role moving forward.

The Ravens‘ pattern of letting edge rushers walk in free agency included the departures of both Terrell Suggs and Za’Darius Smith this year. Baltimore’s defense has allowed 500-plus yards the past two weeks. While the Ravens attempted to patch up their edge-rushing need with post-draft additions of Pernell McPhee and Shane Ray (since cut), they were on the lookout for higher-profile players earlier in free agency. In addition to their Ziggy Ansah and Gerald McCoy meetings, the Ravens expressed interest in Justin Houston and Clay Matthews, Jeff Zrebiec of The Athletic notes (subscription required). Houston landed in Indianapolis, and Matthews has five sacks with the Rams (after a 3.5-sack 2018). The Ravens also made an offer to former Bengals and Broncos nose tackle Domata Peko this week, Zrebiec tweets. But it likely was not up to Peko’s liking, with the 13-year veteran still unsigned.

Baltimore also recognized this need early in the draft, with Zrebiec adding the team pursued several of the acclaimed first-round defensive linemen. But the ones the Ravens sought were evidently gone by the time they selected Marquise Brown.

END_OF_DOCUMENT_TOKEN_TO_BE_REPLACED

Broncos Plan To Move On From DT Domata Peko

The Broncos are unlikely to re-sign veteran defensive tackle Domata Peko, according to Mike Klis of 9News. Denver has told Peko and his camp that it won’t attempt to re-up the 34-year-old during the opening stages of the free agent period.

While Peko isn’t going to be priority for Denver, it does sound as though there’s a glimmer of hope that he could return to the Mile High City. If the Broncos aren’t able to find enough defensive linemen in free agency, they might be open to re-signing Peko at a later date, per Klis. That, of course, would depend on whether Peko himself was able to find a new team on the open market.

Peko is wrapping up a two-year, $7.5MM deal that he signed with the Broncos in 2017 after spending the first 11 years of his career with the Bengals. Over the past two seasons, Peko has only missed two games, racking up 44 tackles (eight for loss) during that time frame. In 2018, Pro Football Focus ranked Peko as the No. 39 interior defender among 112 qualifiers.

The Chargers have not made much of an effort to target Philip Rivers‘ heir apparent yet. Because the plan still appears to be a semi-long-term future with their current starter. Extension talks between the Bolts and their 37-year-old quarterback are set to commence. Rivers confirmed no such discussions have unfolded yet, but going through his 15th season did not change his mindset to avoid retirement for a while. The 2004 first-round pick gave the “year-by-year” answer during a radio interview with San Diego’s XTRA 1360 (via Pro Football Talk) before adding he believes he has a “handful” of seasons left. In the final year of his latest contract, Rivers is due an $11MM base salary and $5MM roster bonus in 2019. A $23MM cap charge is attached to this deal, and another re-up would bring that down. Los Angeles is projected to hold middle-of-the-pack cap space ($25MM-plus).

Here is the latest from the West divisions, moving to one of the Bolts’ top rivals: