SEPTEMBER 29: The sixth-year veteran announced he is undergoing surgery to repair the injury, Rapoport adds (via Twitter). This will almost certainly end Pierce’s season.

SEPTEMBER 28: Michael Pierce‘s first season back with the Ravens may not end up lasting long. The veteran nose tackle suffered a biceps tear in the team’s Week 3 win in New England, Ian Rapoport of NFL.com tweets. 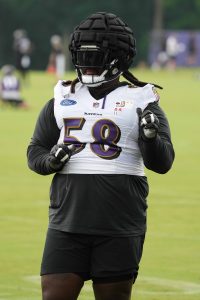 The Ravens are not ruling Pierce out for the season just yet; the team is determining how to proceed. Pierce is weighing whether to undergo surgery or attempt to play through the injury after a rehab effort, Jamison Hensley of ESPN.com tweets.

Pierce, 29, has played five of his six NFL seasons in Baltimore. After the Vikings released him in March, the Ravens brought him back on a three-year, $16.5MM deal. Of that amount, $6.75MM is guaranteed.

This Pierce injury comes nearly a year after an elbow issue shut him down for an extended stretch in Minnesota. Playing on a three-year, $27MM deal the Vikings authorized, Pierce missed nine games last season. That ended up being his only season in Minneapolis, after having opted out of the 2020 campaign.

A Ravens regular for nearly the duration of his rookie contract, Pierce has excelled in run defense with Baltimore. Pro Football Focus has consistently rated the former UDFA as a top-tier interior D-lineman. This year is no exception, with Pierce slotted fifth among inside defenders through three games. This will certainly deal a blow to Baltimore’s run defense, which is already giving up 5.0 yards per carry (28th through three games).

The team opted not to give Brandon Williams a third contract, but the longtime Baltimore D-line starter remains available. So does Ndamukong Suh, whom the Ravens pursued in 2020. Suh re-signed with the Buccaneers that year. The Ravens still roster the likes of Calais Campbell, former third-rounder Justin Madubuike, third-year backup Broderick Washington and veteran Brent Urban on their defensive front.

Michael Pierce is back in Baltimore. While he still hasn’t been seen on the practice field, it sounds like the veteran defensive lineman will be back for the start of training camp. Jeff Zrebiec of The Athletic writes that the Ravens expect Pierce to be at the first day of training camp.

Pierce was a no-show during Ravens minicamp. John Harbaugh was quick to dismiss the notion that the absence was injury-related, stating that Pierce wasn’t participating because of a personal issue.

“He’s healthy, he’s good; it’s just a personal matter with his family, and that’s what it is,” Harbaugh said last month (via the team’s website).

As Zrebiec writes, there was “obviously some concern” about the player’s lack of offseason participation “given Pierce’s past injury and weight issues.” However, having played for Harbaugh, the 29-year-old should be familiar with the team’s conditioning test, so it’s really on Pierce to just come into training camp in shape.

The former undrafted free agent spent the first four seasons of his career with the Ravens, starting 30 of his 60 games. He signed a three-year, $27MM deal with the Vikings in 2020, but Minnesota only got eight starts out of him. Pierce opted out of the 2020 campaign, and an elbow injury forced him to miss the middle chunk of the 2021 season. Still, he was productive during his brief time on the field with the Vikings, collecting 20 tackles and three sacks, and that performance helped him earn a new three-year, $16.5MM pact from Baltimore.

After moving on from the likes of Brandon Williams, Justin Ellis, and Derek Wolfe, the Ravens will be relying on Pierce to provide some much-needed depth on the defensive line. Third-round rookie Travis Jones could see some increased reps at camp if Pierce isn’t ready to go.

Michael Pierce is returning to Baltimore. The veteran defensive tackle is signing with the Ravens, reports NFL Network’s Ian Rapoport (on Twitter).

Pierce will sign a three-year, $16.5MM deal with Baltimore, per Rapoport.

Pierce earned his walking papers from Minnesota earlier this week. The Vikings tried to convince Pierce to take a “moderate pay cut,” and when that didn’t happen, they tried to trade him. They couldn’t find any takers, so they ended up moving on from the defensive lineman. Pierce signed a three-year, $27MM deal with the Vikings in 2020, and he was set to have a $10.5MM cap hit in 2022. His release left behind $4MM in dead cap.

After opting out of the 2020 campaign, Pierce made his Vikings debut in 2021. He ultimately collected 20 tackles and three sacks in eight starts. He suffered an elbow injury that forced him to miss the middle chunk of the season.

Following his release from Minnesota, there were whispers that Pierce could look towards a reunion with Baltimore (via Josina Anderson on Twitter), but it was uncertain if the return of Za’Darius Smith would price the Ravens out of the sweepstakes. Ultimately, the two sides agreed to terms, and Pierce will now return to the team that took a chance on him as an undrafted free agent in 2016. The Stanford product ended up spending the first four seasons of his career with the Ravens, starting 30 of his 60 games.

Michael Pierce‘s stint with the Vikings is about to come to an end. Minnesota is planning to cut the the veteran defensive tackle, reports NFL Network’s Ian Rapoport (via Twitter).

According to the reporter, the Vikings tried to convince Pierce to take a “moderate pay cut,” but the player clearly refused. The team also tried working out a trade, but despite “some feelers,” a deal never materialized. While the wording of Rapoport’s tweet seems to indicate that the Vikings are holding out hope for a deal, a release still seems imminent.

Pierce made his Vikings debut in 2021, collecting 20 tackles and three sacks in eight starts. He suffered an elbow injury that forced him to miss the middle chunk of the season. The Stanford product spent the first four seasons of his career with the Ravens, starting 30 of his 60 games.

The Bills have signed Tim Settle and DaQuan Jones, and one of their previous defensive tackle contributors is heading elsewhere. The Vikings are signing Harrison Phillips, Mike Garafolo of NFL.com tweets.

Buffalo wanted to bring Phillips back, but the four-year veteran moved out of the AFC East champions’ price range, Jeremy Fowler of ESPN.com tweets. The former third-round pick will score a nice payday in Minnesota, signing for three years and $19.5MM.

Phillips worked as a starter and rotational player in Buffalo; he will collect a big raise to likely play a more prominent role in Minnesota. Phillips will join Dalvin Tomlinson in Minnesota, which has Sheldon Richardson on track for free agency and Michael Pierce uncertain to return.

After getting off to a strong start in 2019, Harrison saw that momentum blunted by an ACL tear. He made modest contributions in 2020 but enjoyed a better season last year, making a career-high 51 tackles (four for loss) and posting six quarterback hits. The Bills used Phillips as a starter in eight games last season.

Phillips, 26, joins a Vikings team that plans to address Pierce’s contract, Chris Tomasson of the St. Paul Pioneer Press tweets. The veteran defensive tackle is tied to a $10.2MM 2022 cap number. Since Pierce’s contract tolled after he opted out in 2020, his deal runs through 2023.

SATURDAY: Pierce is now back on Minnesota’s active roster. The Vikings moved Pierce to their game-day 55-man squad Saturday, putting the mammoth D-tackle in position to play for the first time since Week 4.

WEDNESDAY: The Vikings have designated nose tackle Michael Pierce for return from the injured reserve list, per a club announcement. After missing his last seven games, Pierce is finally on the verge of retaking the field.

Pierce enjoyed a great Week 1, collecting two sacks, two tackles for loss, two QB hits, and seven tackles against the Bengals. After that, he was clearly less than 100% and limited to just two tackles over the next three games. Then, when his elbow injury flared up against the Browns, the Vikings were forced to put him on IR.

Pierce, 29, spent his first four seasons with the Ravens. He joined the Vikings on a three-year, $27MM deal in 2020, but missed the year after opting out. His contract tolled, so he remains under club control through 2023.

The 5-6 Vikings could activate Pierce as soon as this week, allowing him to play against the winless Lions. They may also get some additional bulk up front if Dalvin Tomlinson is able to come off of the COVID-19 list.

Michael Pierce suffered an elbow injury on Sunday, and the Vikings nose tackle could end up missing time thanks to the ailment. Ben Goessling of the Minnesota Star-Tribune reports (via Twitter) that Pierce “could be out a while.”

The veteran was limited to only 21 defensive snaps during Sunday’s loss to the Browns. The 28-year-old had a great Week 1, collecting two sacks, two tackles for loss, two QB hits, and seven tackles, but he was limited to only a pair of tackles over the next three games.

After spending the first four seasons of his career with the Ravens, Pierce joined the Vikings last offseason on a three-year, $27MM deal. The defensive tackle ended up opting out of the 2020 season.

The Vikings have already started preparing for Pierce’s absence, signing T.J. Smith to the practice squad. As Goessling points out, Smith is already a bit familiar with the Vikings scheme after having played for current assistant defensive line coach Imarjaye Albury at Arkansas. The reporter also suggests that Dalvin Tomlinson could move to nose tackle with Pierce out of the lineup.