After injuries to veterans Giovani Bernard and Josh Wells, the Buccaneers are making roster adjustments. Both players landed on injured reserve Wednesday, Rick Stroud of the Tampa Bay Times tweets. 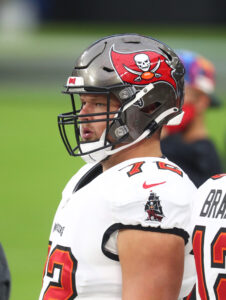 Ankle and calf injuries, respectively, will sideline Bernard and Wells for at least four weeks. Wells’ ailment is not believed to be season-ending, per ESPN.com’s Jenna Laine (on Twitter), but the backup tackle will be shut down for a while.

Wells started in place of injured left tackle Donovan Smith in Week 2, but the ninth-year veteran went down during the Bucs’ win over the Saints. Following Wells’ exit, the Bucs turned to third-year UDFA Brandon Walton, who had spent last season on the team’s practice squad. A Florida Atlantic alum, Walton has only dressed for two NFL games. Sunday marked his first regular-season snaps on offense.

Wells joins center Ryan Jensen and guard Aaron Stinnie on IR. Smith, who missed Week 2 with an elbow injury, remains on the team’s active roster. Smith being unable to go in Week 3 against the Packers would mark yet another new starter for a Bucs offensive line that continues to absorb injury blows. Wells, 31, has been with the Bucs as a backup O-lineman since 2019.

Although the Bucs re-signed Bernard this offseason, the veteran running back has not been used on offense through two games. Leonard Fournette and rookie Rachaad White have played in front of Bernard, whom the Bucs signed as a possible passing-down option last year. Bernard caught 23 passes for just 123 yards last season. At 30, the former Bengals running back has seen time on special teams in his second Bucs slate.

Tampa Bay promoted linebacker Kenny Young and wide receiver Kaylon Geiger to its 53-man roster to replace Bernard and Wells, Stroud adds (via Twitter). The team also added offensive lineman Justin Skule to its practice squad. Skule spent the past three years with the 49ers. While he missed the 2021 season with an ACL tear, Skule started 12 games between the 2019 and ’20 seasons. The Vanderbilt product served as Joe Staley‘s primary replacement during the latter’s 2019 finale.

The Seahawks may be close to bringing Kenny Young back to the NFC West. Seattle hosted the veteran linebacker on a visit over the weekend, reports ESPN’s Field Yates (on Twitter).

The 27-year-old began his career with the Ravens in 2018. By the midway point of his second season, however, he had been traded to the Rams, with whom he made 13 starts in 32 appearances. This past October, the UCLA product found himself being traded again, this time to the Broncos.

Young’s tenure in Denver – only six games in length, but one which saw him play the second-highest snap share of his career – landed him a contract with the Raiders in May. He was released last week, however, leaving him in need of a new landing spot. The Seahawks are projected to start Jordyn Brooks and Cody Barton at linebacker this season, but they could use depth at the second level after parting ways with Bobby Wagner and electing not to reunite with K.J. Wright this offseason.

Here’s a quick round-up of some other recent workouts around the NFL:

Young signed with the Raiders in May, as part of their re-vamped linebacker corps. The 27-year-old gradually grew into a larger defensive role with the Ravens before being traded midseason to the Rams in 2019. He was dealt once again last year, from Los Angeles to Denver. Starting all 13 games he appeared in between the two teams, the UCLA product had a career-year in 2021, but hasn’t done enough during training camp to catch on in Sin City. The Raiders will move forward with the likes of Denzel Perryman, Divine Deablo and free agent signings Jayon Brown and Micah Kiser in the middle of their defense.